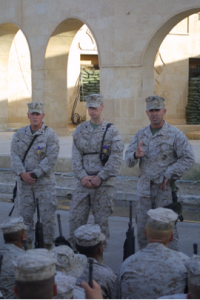 The objective of this paper is to show how post traumatic stress disorder relates to prisoners of war. There will be several questions presented and answered in detail through out the paper.  In addition to my conclusion of the facts that I have gathered, I hope to expand our understanding on prisoners of war and how they are affected by captivity. Also included is a special dedication to all veterans and prisoners of war.

There were many soldiers that were captured during WWII, Korean War, Vietnam War and the Gulf War.  Whether due to being shot down or captured during front line engagement or by any other means, POW’s have been subject to ghastly forms of torture and unthinkable psychological warfare such as starvation, brain washing, physical mutilation, humiliation, sexual degradation, electrocution, and severe sickness. Because of these acts that occurred during captivity many soldiers suffer from post traumatic stress disorder. PTSD is evident in soldiers who have experienced a traumatic event. PTSD can disrupt and impair daily life if symptoms are severe and lasts long enough. Questions to be addressed are: 1) How does PTSD affect POWs? 2) Are treatment options available for those that have PTSD? 3) Is treatment successful in helping POWs cope with all they have endured? Primary focus on the questions above will broaden our understanding of PTSD, what POWs go through and how they live with it.

How Does PTSD Affect POWs?

Once liberated, soldiers are given a medical exam and evaluated psychologically to determine if they have any disorders and other problems.  PTSD can occur in anyone following traumatic events.  PTSD does not emerge in all POWs; it depends on how long their captivity was, what they experienced and if they were alone or not. Department of Defense psychiatrist Dr. (Lt. Col.) Elspeth Cameron Ritchie says that “if you have colleagues with you, you do a lot better than if you are isolated” (Agency Group 09, 2003). Ritchie also described that PTSD begins when the prisoner feels helpless at the time of the event. The phenomenon of learned helplessness is evident to the prisoners early on. PTSD can also emerge many years after the former prisoners of war have been liberated and readjusted to life. Sometimes this happens when other events take place in his/her life such as death of a spouse, aging, and physical limitations.

There are common symptoms associated with PTSD that include: a constant reliving of the experience, dissociation and hyper vigilance according to Dr. Ritchie. Dissociation is when connections are broken.  Hyper vigilance is a feeling of being anxious or on edge all the time. Other symptoms could include difficulty concentrating, insomnia, unable to express one’s self, occupational incapacitation, paranoid reactions and aggression. When these symptoms become chronic that is when it is considered PTSD.  Unfortunately many sufferers of PTSD turn to alcohol and drugs to help them cope with the symptoms. “We did see a lot of alcohol and drug abuse in veterans with PTSD following the Vietnam War,” Dr. Ritchie said (Agency Group 09, 2003).

The families of the former POWs are also affected by this disorder in a great way.  They watch their loved one trying to cope with this disorder and feel helpless and are unsure of what to do. It is very important that the families become involved in the treatment plan to provide support and encouragement.  Some things that can be done to help the survivor are listen and empathize, spend time with them, if they permit, and most of all be patient and love them.

One test that is used to assess PTSD is called CAPS (The Clinician Administered PTSD). This test was the first diagnostic technique used for interview purposes and was developed by Veteran Administration experts.  This test is used to diagnose PTSD in veteran military survivors and also civilians who experienced traumatic events. The test has worked quite well and was considered a year ago the gold standard for this type of assessment (Kohn, Carol, et al, 2002, p7).

Varying degrees of PTSD can also occur among different types of soldiers. A follow up study was completed by Patricia B. Sutker of the New Orleans Veterans Administration Medical center that revealed “intense, prolonged stress may cause long-lasting psychiatric disorders in almost anyone” (Bower, 1991, p68). In her study she evaluated the current mental status of 22 POWs and 22 combat veterans of the Korean War to see which group was more susceptible to PTSD. The POWs spent an average of 28 months in captivity while combat veterans spent an average of 14 months on the front lines. The results revealed that prisoners of war are at a much greater risk of developing PTSD than combat veterans. It is unsure why some POWs avoid psychiatric disorders and others do not (Bower, 1991, p.68). According to the National Center for Post Traumatic Stress Disorder, “about 30 percent of the men and women who have spent time in war zones experience PTSD.”

Are Treatment Options Available for Those That Have PTSD?

There are several different ways to treat PTSD and each treatment will vary among individuals. Not all treatments are successful and there is no cure for PTSD. Some treatments that are used include cognitive behavior therapy, group therapy, exposure therapy and drug treatments.

Cognitive behavior therapy and exposure therapy work together. Under controlled conditions the former prisoner of war undergoes “repeated and prolonged confrontation with anxiety-evoking objects or situations, until anxiety is gradually reduced through the process of extinction/habituation,” notes Maria Livanou, Department of Psychological Medicine, Institute of Psychiatry (Livanou, 2001, p181). This technique can work with a live therapist or the patient can do it alone using his or her own images or audio tapes. Imaginal exposure is when the therapist constantly repeats the experience in detail to the survivor in present tense while the survivor focuses on the most disturbing aspects of the trauma until habituation eventually occurs and anxiety is reduced (Livanou, 2002, p.181). CBT is considered to be an effective treatment option.

Group therapy is another treatment technique and involves a group of POWs that meet in a certain place and time each week from an hour to an hour and a half to openly discuss their problems. Often sessions are held in Veteran Administration Hospitals or private meeting areas outside hospital settings.  Group therapy allows the former POWs to start sharing their experiences with each other therefore working on social skills and internal psychological thoughts. The participants are given the opportunity to interact with peers who have experienced similar situations as there own, thereby creating social support. As the sessions continue it is noticed that the POWs break similar patterns such as guilt, shame and abandonment. A therapist is present to instruct, support and encourage involvement. “Group therapy is especially helpful in the cases of chronic war trauma as it permits therapeutical work on the most painful wounds and residues” notes Salvatore Makler. (Makler, et al, 1990, Vol 44, Issue 3).

Another form of therapy is drug therapy known as pharmacological treatment.  There are several reasons as to why one would choose drug therapy. Access to this type of treatment may be easier for the patient and perhaps they do not want to relive the experience as in cognitive behavior therapy.  Also some people do not respond to psychological treatment, therefore they choose drug treatments (Turner, 1999,  Vol 354,Issue 9188).

There are several different categories to choose from when it comes to drug therapy. The most widely used drug treatment includes antidepressants such as Zoloft and Prozac, although other medications are used such as Serzone, Effexor and Elavil. (Aetna:InteliHealth)  This is considered the first line treatment when drug treatment is indicated initiating serotonin reuptake inhibitors (SSRIs) such as mentioned above (National Center for PTSD). To rapidly relieve any feelings of anxiety triggered by PTSD some doctors might prescribe anti anxiety medications such as Valium and Xanax to list a few. Although the symptoms are reduced some of the drugs mentioned above carry the risk of dependency. As with a lot of medications being prescribed questions arise as to whether medications really work or only mask the problem?

Is Treatment Successful in Helping POWs?

Many studies have shown that the treatments mentioned above are successful in helping prisoners of war control the symptoms of PTSD and be able to live a happy and productive life.  Some treatments are used in conjunction with others or some by themselves. A sense of power (and other obstacles) can be re-established if treatment occurs relatively quickly.  More often than not a survivor is more likely to have a better outcome if treatment begins soon after the experience. “At present, cognitive behavioral therapy appears to be somewhat more effective than drug treatment. However, it would be premature to conclude that drug therapy is less effective overall since drug trials for PTSD are at a very early stage” (National Center for PTSD).  Many case reports and studies have been published regarding the effectiveness of treatments. The outcome of these studies vary among individuals and which treatment is most effective. In general, behavioral therapy and medication therapy specific to SSRIs have both been shown to be effective (Foa, E., 2000, Vol 13).

It is evident that prisoners of war and others who experience traumatic events are greatly affected by PTSD and other disorders or symptoms if they last long enough.  It is important to first identify the symptoms and then get help.  PTSD may not be curable but it can be controlled. Not all people who have traumatic events need psychological treatment but can improve their symptoms or condition through the help of family and friends (depending on the severity of the event).

Dedication to All Veterans and POWs

Admiration, respect and love are three emotions that occur to me when any veteran honorable serves his country but when I hear a prisoner of war story special emotions that I can’t even describe surface. Tears come to my eyes when I think that someone I don’t even know is protecting me but going through “hell” to do it. That person or persons might die (as many have) for me to be able to sleep peacefully at night. I thank God for their extreme dedication, bravery, courage and existence.  Peace, liberty and the American way of life would not exist if brave men and women did not step forward to defend us. Thank you all.

« Major Depressive Disorder: What are the Facts?
Sexual Addiction »
advertisement