You are here: AllPsych > Journal > Psychoanalysis 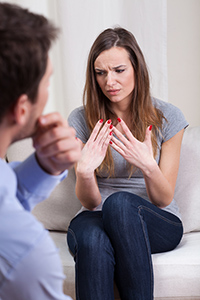 Psychoanalysis is probably the most widely recognized theory in psychology, having been integrated into our culture through novels, poetry, drama, and film criticism. Terms such as unconscious, repressed, ego and denial are used in everyday conversation to describe mental states and reasons for human behavior. However, psychoanalysis remains a difficult field to define. Author Joseph Schwartz suggests that it can be defined by three boundaries~ a boundary with literature, a boundary with psychiatry, and a third with academic psychology.

Literature and psychoanalysis share a concern with the human subject, in that they both deal with the complexities and contradictions of human actions, and emotional life (Schwartz 1999). Literature, however, is often a medium for describing or symbolizing human interactions, whereas psychoanalysis tries to understand it. Psychoanalysis does have many literary references, such as the Oedipus complex, but the origins do not lie with literature. Historically psychoanalysis is considered a Western science as a systematic attempt to understand our experience of our own personal inner world (Schwartz 1999).

Psychoanalysis and psychiatry are similar in that they both share the goal of finding effective treatment for human mental anguish. The foundation of psychiatry, however, lies with medicine and clinical research in finding ways to treat symptoms of illnesses such as hysteria. Psychoanalysis is more concerned with determining unconscious causes of mental illness, not only the symptoms. Freud believed that determining and discussing causes is an effective treatment of mental illness. Psychoanalysis sees mental illness as a result of human experience rather than biological errors of the brain and central nervous system.

The term “psychoanalysis” was first used by Freud in 1896, but he had been working on the theory for some time before that (Gay 1988). He was originally under the influence of Breuer and had shifted from hypnosis to the talking cure, and then gradually adopted Breuer’s methods until by the mid-1890s the theory of psychoanalysis was born. For more than three decades Freud played with his new concept, refined psychoanalytic technique, revised his theories, influenced art history with his theory, and redefined the field of psychology with his intriguing new ideas. By the end of 1899 the principals of psychoanalysis were in place. Freud’s The Interpretation of Dreams, published in 1899, was the first text explaining these principals, and Freud considered it essential to his work. Freud once said “The interpretation of dreams is the royal road to the knowledge of the unconscious in mental life” (Gay 1988).

Attacks on psychoanalysis seem an integral part of the history of psychoanalysis. From its birth at the turn of the century, psychoanalysis has inspired strong feelings. Negative reviews of the theory have been hostile, dismissing it due to the unverifiable nature of the analysis report and the emphasis on sexual causes of mental disorder (Webster 1995).

There are certain markers in the historical timeline of psychoanalysis. The first marker is the role of Sigmund Freud (Gay 1989). Antecedents of psychoanalysis associated with the name Sigmund Freud can easily be found earlier in the century in the medical profession, in the confessional practiced by the Catholic Church, in literature, and in ancient Greece (Gay 1989). But tracing these historical roots does not do justice to Freud’s originality, just as seeing the roots of heavier than-air flight in the drawings of Leonardo da Vinci does not do justice to the achievement of the Wright brothers. There is a definite uniqueness to Freud’s contribution to the creation of psychoanalysis. Psychoanalysis is a departure from, not an extension of, past human practices (Gay, 1989).

A second marker in the history of psychoanalysis is its roots in natural science. Psychoanalysis was an attempt to understand the nervous diseases of hysteria, phobias, obsessions and paranoia (Gay 1989). The origin of the approach to treating these conditions with psychoanalysis lies in the premise of nineteenth-century science. Freud came to the problems of mental health as a neuroscientist, but he approached traditional medical problems from the perspective of basic research: to learn and understand. Freud came to realize that the symptoms of nervous diseases were messages that could not be expressed in any other way.

A third marker is the invention of the analytic hour. When Freud initiated the practice of psychoanalysis based on concentrated listening to what people had to say about their lives, he created a method for the exploration of the human inner world and a theory for understanding what one might find there (Gay 1989). The analytic hour, a lasting contribution of psychoanalysis to human knowledge and practice, is repeated, concentrated, and extended listening sessions for the purpose of understanding the patient’s life experience (Gay 1989).

The analytic hour is an instrument that reveals an unseen world. It was discovered that powerful, difficult thoughts and feelings were shown in hourly sessions repeated over long periods of time. The analytic relationship between the analyst and the patient came to be called the transference relationship. Freud once cautioned early analysts in a famous paper published in 1916 that, “it may seem so, but it is not you that your patient is in love with” (Gay 1989).

A fourth marker is the disputes, or as Gay called them, splits, that have accompanied the development of psychoanalysis. According to Gay, the human inner world, like the physical outer world, has a structure. Workers in the field have been attracted to different aspects of the structure of the inner world leading to the disputes between Freud, Carl Jung, and Alfred Alder in 1911-1913. Jung criticized Freud’s neurotic inability to acknowledge religious and spiritual feelings. Alder argued that Freud’s emphasis on sexuality was a product of Freud’s own personal experience. What is important to the history of psychoanalysis is not so much what the disputes were about, but that they could not be contained within the field (Gay 1989). What these disputes demonstrate is that paradigm shifts do not occur easily, but are a result of great personal stresses, rivalries, and the divisive phenomenon of winners and losers, all set in particular historical circumstances which can act to either further or to inhibit the development of new understanding (Gay 1989).

A single dominant generalization connects the markers along the historical timeline of psychoanalysis. From the beginning psychoanalysis has been undergoing a paradigm shift. The basic conflicts in the human inner world do not lie with tensions caused by unsatisfied drives, but with difficulties in satisfying a fundamental human need for relationship (Gay 1989).

Psychoanalysis has taken a different appeal in the United States than it has in Europe. In Britain, France, Germany and Austria many early analysts were drawn to psychoanalysis from the disciplines of literature, philosophy, law, and natural science because of their interest in what was being discovered about the human psyche in the analytic hour (Schwartz 1999). In the United States, however, psychoanalysis developed as more of an extension of medical practices by doctors of psychiatry and neurology. In the US, medical training became a prerequisite for psychoanalytic training and psychoanalysis was to become a leading branch of psychiatric practice (Schwartz 1999). Psychoanalysis was adapted by a group of creative analysts to treat cases of the most serious mental distress, the psychoses, in large institutional settings, despite opposition from the Old World (Schwartz 1999).

In 1890, the State of New York passed the State Care Act, ordering the indigent mentally ill be removed from poor-houses to state hospitals where they could be treated rather than simply stored. The Act also established the New York State Pathological Institute, the first institution for psychiatric research in the US (Schwartz 1999). The State Care Act marked the beginning of the modern administrative phase of US psychiatry.

In 1893, the Association of Medical Superintendents of American Institutions for the Insane invited Weir Mitchell, famous for his rest cure for mental distress, to deliver its fiftieth anniversary address (Schwartz 1999). Mitchell’s rest cure consisted of a program of strengthening the body until the physician was able to have an influence on the patient’s emotional state. A milk diet, building slowly to more adequate food, absolute bed rest, to the extent that the patient was only allowed to sit up for a few minutes each day, massage, and slow exercise were the beginnings of his treatment. This led to a psychological therapy for a range of disorders including phobias, obsessive neurosis, anxiety disorders, schizophrenia and manic depressive psychosis. Beverley Tucker, a family friend and colleague of Mitchell recalled: “His patients told him everything as he dug into their psychogenic experiences and he patiently explained to them and suggested away their problems” (Schwartz 1999).

As psychoanalysis enters the twenty-first century there are certain tensions that dominate it. There is tension caused by conflicting points of view, a continuing tension about the place of psychoanalysis in science. There is a tension between psychoanalysis and psychiatry. And there is also the widespread tension between the importance of emotional life for human well-being and its denial in public life (Schwartz 1999).

Psychoanalysis has the potential to replace our fantasies about human relationships with a real understanding of human relational needs, as seen in the analytic hour. I believe that it is psychoanalysis that gives us the freedom to explore our inner conflicts about our relational needs, and affords us the space to resolve those conflicts. Psychoanalysis teaches us that human relationships are an integral part of our growth and development, that failure to satisfy these relational needs have lasting negative effects on our lives. The analytic hour I think is an irreplaceable tool for treatment of painful inner conflicts. Just as the insights of natural science were central to the creation of medicine and technology, the insights of psychoanalysis are crucial to emotional well-being and to humanity as a whole.