Alcoholism and Its Effect on the Family
Tetyana Parsons 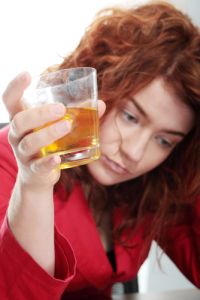 According to the Random House Dictionary of the English Language (1966), alcoholism is defined as “ a diseased condition due to the excessive use of alcoholic beverages” (p.35) Silverstein in his book “Alcoholism” (1990) gives three criteria that the American Psychiatric Association listed for physicians to diagnose this disease (p.30) :

1. physiological problems, such as hand tremors and blackouts

2. psychological problems, such as an obsessive desire to drink
3. behavioral problems that disrupt social or work life

Alcoholism is also known as a family disease. Alcoholics may have young, teenage, or grown-up children; they have wives or husbands; they have brothers or sisters; they have parents or other relatives. An alcoholic can totally disrupt family life and cause harmful effects that can last a lifetime. According to U. S. Department of Health and Human Services and SAMHSA’s (Substance Abuse & Mental Health Services Administration) National Clearinghouse for Alcohol and Drug Information, seventy six million American adults have been exposed to alcoholism in the family. Alcoholism is responsible for more family problems than any other single cause. According to Silverstein (1990), one of every four families has problems with alcohol.

Each member of the family may be affected by alcohol differently. Parental alcoholism may affect the fetus even before a child is born. In pregnant women, alcohol is carried to all of the mother’s organs and tissues, including the placenta, where it easily crosses through the membrane separating the maternal and fetal blood systems. When a pregnant woman drinks an alcoholic beverage, the concentration of alcohol in her unborn baby’s bloodstream is the same level as her own. A pregnant woman who consumes alcohol during her pregnancy may give birth to a baby with Fetal Alcohol Syndrome (FAS). Fetal Alcohol Syndrome is one of the three top known causes of birth defects. According to the National Council on Alcoholism and Drug Dependence, about 5000 babies are born each year with severe damage caused by FAS; another 35000 babies are born with more mild forms of FAS (Berger, p.37).

In general, the more severe the mother’s drinking problem during pregnancy, the more severe the symptoms of FAS in infants. Babies born with FAS are shorter and underweight compared to normal babies. They have deformities of the brain and skull, and very characteristic facial features such as small eye openings; thin upper lips; long, flat faces; and a long groove in the middle of their upper lips. These children’s central nervous systems are also damaged. As a result, children with Fetal Alcohol Syndrome have difficulties in learning, attention span, judgment, memory, problem-solving, and frequently behavior problems. Children with FAS may also have problems with social skills. Their frustration easily turns to anger as they grow older. These children are hyperactive – unable to sit or stand still for a long time. They are often impulsive, poorly coordinated, and have impaired speech and hearing. Fetal Alcohol Syndrome and its effects are permanent, often leading to lifelong problems with mental retardation.

COAs more often have problems in school. The stressful environment at home prevents them from studying. Their school performance may also be affected by inability to express themselves. Often COAs have difficulty in establishing relationships with teachers and classmates. COAs tend more often to have to repeat the academic year and more often drop out of school. A Unites States government survey, “Exposure to Alcoholism in the Family”, shows that 30 percent of young women who didn’t complete high school had grown up in families with alcoholic parents (Berger, 1993, p.75). The same survey shows that only 20 percent of young men from alcoholic families went to college. Some COAs have such behavioral problems as lying, stealing, fighting, and truancy. These children live in extremely unstable home environments. They never know what to expect from an alcoholic parent. Because they are unable to predict their parent’s mood, they don’t know how to behave themselves. Just like non-alcoholic spouses, COAs think they can stop their alcoholic parent from drinking by hiding liquor, or by pleasing the parent with good grades in school. They may tiptoe around the house while the alcoholic parent sleeps, hoping not to awake the drunken person until enough time has passed for the alcoholic parent to “sober up”. Children of alcoholics feel guilty for their failure to save their parents from the effects of alcohol.

Because crime and violence are associated with alcoholism, incest and battering are common in alcoholics’ families. According to Berger, almost 30 percent of father – daughter incest cases and 75 percent of domestic violence cases involve a family member who is an alcoholic. Incest and battering victims often blame themselves for what has happened. Because they feel so guilty, ashamed, and helpless, they themselves may turn to drinking as the way to escape the pain. “Children of alcoholics are people who have been robbed of their childhood” (Silverstein, 1990, p.75). Children of alcoholics, if untreated as children, carry their problems into later life.

Adult children of alcoholics (ACOAs) often don’t relate their problems to having grown up in a family with an alcoholic parent. Many of them have problems of depression, aggression, or impulsive behavior. Some studies have shown that ACOAs have problems with abuse of different psychoactive substances, and difficulty in establishing healthy relationships with others. They are frequently failures as parents themselves, often make poor career choices, and almost all ACOAs have a negative self-image (Berger, 1993, p.67). Adult children of alcoholics often have feelings of worthlessness and failure. They also may have problems with family responsibility because their alcoholic parent was irresponsible and didn’t provide them with basic children’s needs.

Many ACOAs have problems with intimacy, because their previous experience has taught them not to trust other people. They may also think that if they will love someone, this person will hurt them in the future, just the same as their alcoholic parent did. Unfortunately, research has shown that many ACOAs often find themselves intimately involved with someone who is an alcoholic, or in some way abusive (Wekesser, 1994, p.143). ACOAs are four times more likely than children of non-alcoholics to develop alcoholism. Genetic factors play a major role in the development of alcoholism. Another factor is inability to deal with stress in a healthy way. Joseph A. Califano, former United States Secretary of Health and Human Services, pointed out some other facts about ACOAs. He says, “sons of alcoholics see doctors more often than those raised in non-alcoholic homes. Further, they have higher rates of such psychological or mental disorders as anxiety, depression, and introversion” (Berger, p.69). Berger also states that adult daughters of alcoholics tend to have more reproductive problems and see their gynecologists and obstetricians more often. In addition, they have higher rates of an eating disorder – bulimia.

Alcoholism also has negative effects on the spouse of an alcoholic. The spouse may have feelings of hatred, self-pity, avoidance of social contacts, may suffer exhaustion and become physically or mentally ill (Berger, 1993).Very often the spouse has to perform the roles of both parents. Family responsibilities shift from two parents to one parent. As a result, the non-alcoholic parent may be inconsistent, demanding, and often neglect the children. Having financial difficulties is another issue that families of alcoholics have to deal with. The family may have to give up certain privileges because of the large amount of money spent on alcohol and also possible joblessness. A survey, “Exposure to Alcoholism in the Family”, conducted in 1988 suggested that alcoholism is a major factor of premature widowhood (Berger, 1993, p.13). Alcoholism also is one of the major reasons for divorce.

Today, experts who study alcoholic families know that family and marital problems often start because of alcoholism, but they also learned that spouses and children may contribute to the drinker’s habit and make it worse. Some of the families allow heavy drinking to continue rather than deal with serious family problems, and keep the habit going in exchange for keeping the family together. Denial is an essential problem for alcoholics and family members. Family members use denial to rationalize the drinker’s alcohol dependency. In the beginning, denial is understandable because every family loves and wants to protect its members, but there comes a time when denial negatively affects family members. When family members deny the obvious and refuse to look for help, their behavior can trigger multiple emotional problems in the children of the family.

Members of alcoholic’s families very often become codependent. “Codependency is an unconscious addiction to another person’s abnormal behavior” (Wekesser, 1994, p.168). Most alcoholics have periods when they stop drinking for a short while and seemingly do well, leading the codependent person to believe that the problem can be solved. Often people who don’t know the alcoholic very well don’t suspect any problem. The alcoholic’s codependent family members do everything possible to hide the problem, preserve the family’s prestige and project the image of a “perfect family”. The spouse and children may avoid making friends and bringing other people home, in order to hide problems caused by alcoholism. Codependent members often forget about their own needs and desires. They devote their lives to attempt to control or cure the drinker. Unknowingly, codependent family members often become “enablers”. An enabler is “a person who unknowingly helps the alcoholic by denying the drinking problem exists and helping the alcoholic to get out of troubles caused by his drinking” (Silverstein, 1990, p.65). The enabler will clean up the alcoholic’s vomit and make excuses to his or her boss, teacher, or friends. The enabler lies for the alcoholic, and thus enables the alcoholic to continue drinking.

While alcoholism treatment programs such as Alcoholics Anonymous help people with alcohol dependence to stop drinking and improve their life styles, family and marital therapy and various self-help groups help alcoholic families to improve their own well-being. Families of alcoholics need treatment just as much as alcoholics. Marriage and family counselors can help with the tensions created in the alcoholic’s home. School counselors can provide information and support to adolescents who have family problems because of parental alcoholism. Therapists in hospitals and mental health centers, and state-run alcohol programs provide information and services for alcohol related problems. According to Silverstein (1990), Al-Anon and Alateen are two of the most successful organizations helping families of alcoholics. Al-Anon is designed to mainly help the spouses of alcoholics, while Alateen is designed to help children of the alcoholic. Both organizations’ philosophy is based upon Alcoholic Anonymous’s Twelve Step Recovery Program. The main goal of these organizations is to help family members understand that they are not responsible for an alcoholic’s drinking problems and that family members’ recovery does not depend upon the alcoholic’s recovery.

U.S. Department of Health and Human Services and SAMHSA’s National Clearinghouse for Alcohol and Drug Information. Retrieved October 15, 2003, from https://www.health.org/nongovpubs/coafacts/