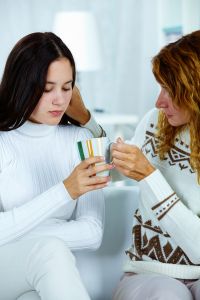 Before beginning any treatment with a homosexual client, a therapist has the responsibility of making sure he or she is well versed on issues related to sexuality, has the skills necessary to create a positive and nonjudgmental environment, and will not feel uncomfortable discussing issues related to homosexuality. If a therapist believes homosexuality is wrong, sinful, immoral, or a mental illness, he or she should NOT work with gay clients. Refer this client to someone who is able to provide the necessary components of a therapeutic relationship.

If a therapist believes that a person can change his or her sexual orientation (often referred to as conversion, reparative, or reorientation therapy), it is only ethical to do adequate research on the topic before beginning such treatment. Understand that the American Psychiatric Association, The American Psychological Association, The American Academy of Pediatrics, and others have denounced this type of treatment due to the high incidences of negative outcomes and very low and even questionable success rates. Also understand that while you can help a client change his or her behavior, it is much more difficult, if not impossible, to change who they are. Think about convincing a straight male attracted to blonds that he must now be attracted only to red heads. He would likely respond, “but I like blonds, I can’t change that, it’s a part of who I am.”

When working with gays and lesbians, it is often important to know where your client is in terms of acceptance. If sexuality is a presenting issue, understanding the stages is even more important. Cass (1979) lists six stages that many homosexuals go through when dealing with their own sexual orientation. These stages have been widely accepted by professionals and gay men and women alike. They include:

(1) Identity Awareness. The point when the child or adolescent begins to realize he or she has feelings that are different from others and different from what they have been taught.
(2) Identity Comparison. The individual begins to explore his or her feelings alone and to compare them to the beliefs of society, parents, and peers.
(3) Identity Tolerance. During this stage, the individual will often rebel against his or her feelings and attempt to deny them. After all, nobody wants to be gay in a straight world.
(4) Identity Acceptance. After realizing that sexuality is a part of who they are, they begin to embrace it, explore their feelings and desires, and start to find a place in the world where they are accepted and belong.
(5) Identity Pride. Often involves anger toward parents, society, religion, or other aspects of the world that tells them that they are bad, wrong, immoral, or mentally ill merely because their feelings are directed toward the same sex. They embrace the ‘homosexual lifestyle’ and explore their newfound sexuality. It is during this stage that the gay or lesbian may start fighting against what society has taught them.
(6) Identity Synthesis. The final stage in which homosexuality becomes a part of who they are rather than the defining factor. Instead of being a gay man or lesbian, they begin to see themselves as parents, employees, leaders, teachers, supervisors, coaches, and volunteers who just happen to be gay. In the final stage, they are able to accept themselves more wholly rather than seeing their sexuality as separate from the rest of who they are.

When counseling a homosexual client, it is important to understand where they are in terms of their sexuality. Those attempting to convert to a ‘straight lifestyle’ are likely in stage two or three. They have not yet accepted themselves as gay and have not likely experienced friendship and love from others who know their sexual orientation. While conversion therapists have reported limited success, this success is often in terms of behaviors and not thoughts and feelings. In other words, a gay man may be able to avoid sexual contact with other men, but they still have feelings and thoughts related to being gay. And, since sexuality is often present at the onset of adolescence, research has shown that it is not real amenable to change. (Individuals who return to a straight life after changing their sexual behavior due to a trauma such as rape were likely not gay in the first place. They merely engaged in homosexual behaviors.)

Those in stages four and five are likely trying to reinvent themselves with this newfound acceptance. They may be seeking out gay friends, engaging in sexual behaviors less discriminately, or ‘shouting it from the mountain tops,’ so to speak. They have accepted their sexuality but have not yet learned to integrate this aspect of their life into their sense of self. In treatment, the strength these individuals feel should be embraced and treatment should be focused on what they can do, not to make the world accept them, but to show the world that they are worthy of acceptance. In other words, gay parades, demonstrations, email campaigns to congress, are all worthy efforts, but so is living an honest life, helping other people, sharing, loving, and being a friend.

Individuals in stage six are often seen as no different from most clients we see in therapy. They have accepted their sexuality, have developed relationships, and don’t see ‘gay’ as the issue, but rather as one of the many issues they deal with in an imperfect world. Being gay is often seen in a positive light. They can now begin to give back to others, become a mentor, volunteer, run for office, or otherwise use their whole self as a means to make the world a better place.

Aside from issues arising from the first five stages above, treatment for homosexual clients should be no different than any other client. In terms of mood disorders, anxiety disorders, relationship concerns, stress, and sexual issues, homosexual clients present at about the same rate as their counterparts and treatment should not be any different. Research has, however, shown that depression is significantly higher among gay adolescents and that the suicide rate is double their straight counterpart. Suicidal ideation, depression, and anxiety are also higher among those who have not accepted their sexuality or who struggle for acceptance with friends and family because of their sexual orientation.

Couples therapy should be treated no different than marital therapy, aside from the obvious legal and social issues. Any bias a therapist has will be very difficult to hide when dealing with relationship issues with a gay or lesbian client. Their relationships should be treated with the same legitimacy as any committed relationship, and the therapist should be aware that like any sexual relationship, their may be intimacy concerns, fidelity issues, children, parents, and other issues that may be a part of treatment. Be prepared for this and once again, refer out if you are not able to accept and respect your client.

Below are a few websites that offer suggestions on counseling with gay and lesbian clients.

https://www.apa.org/pubinfo/answers.html (Answers to your questions about sexual orientation and homosexuality. -American Psychological Association)

Consider the following statements released by professional organizations regarding gay to straight conversion therapy. If it is attempted, please do so with open eyes and with a solid understanding of the likely consequences. (Retrieved from the King County government website, June 7, 2003)

“For nearly three decades, it has been known that homosexuality is not a mental illness. Medical and mental health professionals also now know that sexual orientation is not a choice and cannot be altered. Groups who try to change the sexual orientation of people through so-called conversion therapy are misguided and run the risk of causing a great deal of psychological harm to those they say they are trying to help.”
-American Psychological Association

“Clinical experience suggests that any person who seeks conversion therapy may be doing so because of social bias that has resulted in internalized homophobia, and that gay men and lesbians who have accepted their sexual orientation positively are better adjusted than those who have not done so.”
– American Psychiatric Association