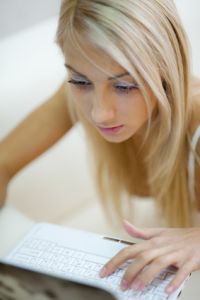 So far addictions have mainly focused on highs that are produced from the use of drugs or other external forces that affect the brain’s chemical responses. However it has recently been brought to the public’s attention that an individual can receive a similar kind of “high” from using the Internet. This malady has been termed Internet Addiction Disorder (IAD). The research for this disorder is fairly new and scarce, but the results leave something to mull over. It affects everyone involved with the “user,” and moreover there are a few psychologists who know how to treat it.

The growth of a hardly satisfied and very innovative population has created an environment where the saturated use of the computer, and its additional benefits is an orthodox. It no longer matters where one travels or how much room for luggage one has, a computer can be brought regardless of the inconveniences. This availability opens a door to the Internet that can be accessed from almost anywhere a person whishes to render its services. Just like any other hobby however some of its users start to spend an extended amount of time in it, which can lead to an addiction of the pastime. These people who cross the line are said to be suffering from a newfound diagnosis termed by researchers as Internet Addiction Disorder or (IAD) (Dr. Grohol, 2003, par. 1).

Since the craving people have to use the Internet unrestrained is a fairly new concept that has been brought to public attention just recently there has not been much research done in the field to date. And it is still a very debatable question whether it exists or not. Some say that the Internet is addictive to the point where it controls one’s life, others say that it is not the same as getting high or drunk to an extreme. Nevertheless the Internet is affecting the people who use it extensively whether it be called addictive or not.

According to Dr. John Grohol the original research cases were exploratory surveys which do not explain the relationship between the supposed behavior and its cause (2003, par. 2). In other words, the surveys can explain why a person feels and behaves in certain way, but they cannot conclude that the behavior has been caused by the prolonged usage of the internet (Dr. Grohol, 2003, par. 2). Grohol does, nevertheless, agree that people do have problems from spending too much time on the computer, and he relates to the idea that people engage in the activity because they do not want to deal with the problems in their lives (2003, par. 4). It is similar to the behavior that a person who watches a lot of TV reveals, or the person who reads an abundant amount of books, or that of the person who goes out for a few drinks regularly.

The enterprises most people engage in while on the Internet deal with chat rooms, discussion forums, e-mailing, or on-line gambling. This action is therefore said to be nothing more than socialization (Dr. Grohol, 2003, par. 17). Even though this new kind of socialization is employed in a different kind of modality. David Greenfield, PhD, founder of the Center for Internet Studies disagreed by quoting that “It’s (the Internet) a socially connecting device that’s socially isolating at the same time (DeAngelis, 2000, par. 7).”

Researchers who concur that the Internet is addictive have already established that the disorder develops into a dependency for the person; they experience tolerance and withdrawal affects (Ferris, par. 1). Similar to what an addict of any other substance goes through, and becomes just as isolated as them. Rejecting the real world and adopting the Internet as a route of escape to a mood altering experience (DeAngelis, 2000, par. 8).

The rationale why people become addicted to the Internet is vast. Some theories to explain addiction disorders are rooted with behavioral explanations, psychodynamic and personality explanations, sociocultural explanations, and biomedical explanations (Ferris, par. 5). The behavioral view is that the individual functions under B.F. Skinner’s operant conditioning (Ferris, par. 8). In which the subject can either be rewarded positively, negatively, or be punished for their course of action. An example of it would be an individual who has always been too timid to met new people and make acquaintances. For this individual the Internet would represent the means to experience love, hate, satisfaction, and fulfillment without interacting face to face with another person (Ferris, par. 8). A rewarding experience that could become reinforcing in itself.

The psychodynamic and personality explanations to addiction deal with the individual and his/her experiences. Depending on the childhood events that affect the individuals as children and the personalities traits they developed, they become predisposed to develop an addictive behavior, or none whatsoever (Ferris, par. 6). It is not the subject or the activity that is important in this case, but the individual, and the foundation under which they become addictive. A foreign exchange student can be liable to go on the Internet looking for familiarity and in the process is susceptible to a desire to be mentally there all the time.

Sociocultural explanations illustrate addicts according to their race, sex, age, economic status, religion, and country (Ferris, par. 7). However there is not enough diversity among the current Internet users to affirm that that kind of a statement as valid. For example alcoholism has been said to be more common in Native Americans, Irish Americans, and Catholics (Ferris, par.7).

The biomedical explanations deal with hereditary and congenial factors, chemical imbalances in the brain and neurotransmitters (Ferris, par. 9). This suggestion resembles the use of prescribed drugs by patients who need the chemical balance in the brain, or those who get a high from running, or gambling. The Internet provides a temporary high.

In another research conducted by psychologist Kimberly S. Young, Ph. D., there were 496 heave Internet participants who were compared to the clinical criteria for Pathological gamblers (Young, 1996, par. 1). The reason this was done was because Pathological gambling is considered the closest type of addiction to internet addiction since it involves failed impulse control without involving an intoxicant (Young, 1996, par. 1). The participant had to meet four or more of the criteria (see insertion 2) to be classified as a “dependent” Internet user; if the participant did not meet the criteria over a 12-month period then they were considered “non-dependent” users (Young, 1996, par. 2). Of the ones who volunteered 239 females and 157 males were classified as dependent, and 54 females and 46 males where considered non-dependent (Young, 1996, par. 3). The dependency of the internet on an individual can harshly “disrupt one’s academic, social, financial and occupational life” said Young, just like any other disorder; gambling, drug use, or eating disorders (1996, par. 4).

There have been publicly announced people who are said to suffer for IAD (Internet Addiction Disorder). One case was, reported in the New York Times, of a woman who had been divorced by her husband because of her excessive use of the Internet. Still the woman did not come to her senses and continued to use the internet so much that she forgot to buy food for her children, to take them to doctor appointments, and to buy enough oil to warm her home (Ferris, par. 10). There is also the story of a seventeen year old who suffered from Internet withdrawal symptoms; when taken to a drug and alcohol rehabilitation center his body convulsed about, and her started to throw chairs around (Ferris, par. 10).

Treatment for people who have been diagnosed with Internet Addiction is very hard to find. First, one has to deal with finding a psychologist or a physician who will see eye to eye and acknowledge that the disorder is real, and not attributes to another disorder (King, 1996, par. 29). Then, there’s the lack of the psychologists’ knowledge of how to diagnose a treatment, and conduct the follow-ups for the IAD patients (King, 1996, par. 29). Going cold turkey can of course work for some, but not for everyone because it requires a lot of positive support and anti-depressants. In that (cold turkey) category the people who work in a job where the computer is a requirement, and not a choice, would definitely fail the treatment miserably.

The people who log on to utilize the chat rooms are evidently looking for social acceptance, while the ones who create a role playing persona are eager to be accepted as themselves (King, 1996, par. 33). Yet the primary step to take in the path to recovery is to accept and not refute, a defense mechanism mentioned by Freud Sigmund called “denial,” that one might be undergoing Internet Addiction. Once this obstacle is conquered the treatment can be performed healthier than it would have otherwise been with patients who rejected they suffered from any kind of disorder.

King quoted on his web site that “A passion adds value to one’s life, and an addiction takes away value (King, 1996, par. 8).” So it is best for one to be conscious of the amount of time spent on the Internet and the consequences that could spring from it. Addiction or not the quantity of time spent on the Internet does take away from one’s life and detaches those whom one loves most. Threading life carefully knowing that time is not a luxury is the best way to go.