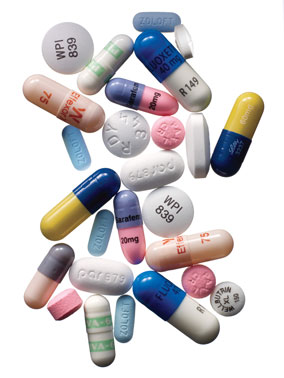 How they Work: Inhibit the uptake of norepinephrine and serotonin (neurotransmitters in the brain) at the synapse

What they Treat: Most useful for somatic symptoms of depression such as appetite and sleep difficulties, and feelings of sluggishness associated with other depressive symptoms

How they Work: Inhibit the uptake of serotonin (a neurotransmitter in the brain) at the synapse

What they Treat: Used to treat depression, obsessive-compulsive disorder, and eating disorders

Possible Side Effects: similar to the tricyclics, although less common, and often less severe

How they Work: Increases neuropinephrine (a neurotransmitter in the brain)

What they Treat: Used to treat symptoms of depression such as
increased appetite, hypersomnia, and phobic symptoms

Possible Side Effects: hypotension, dizziness, dry mouth, upset stomach, weight gain, blurred vision, headache (Foods with a high level of the amino acid tyramine can not be ingested while on this medication due to potentially fatal interactions. These foods include cheeses, beer, wine, packaged soups, sour cream, yogurt, and some vegetables)

This category covers medications typically used to treat anxiety disorders and symptoms, or for difficulties with sleep. There are three subclassifications:

How they Work: Enhance the activity of the neurotransmitter GABA

What they Treat: Most useful for anxiety symptoms and/or panic disorder, treatment of insomnia

How they Work: Interrupt the impulses to the reticular activating system (part of the brain which controls the wake state, arousal, and attention)

What they Treat: Used to treat symptoms of anxiety but have been supplanted by the benzodiazepines due to the more dangerous side effects and potential for addiction of this classification

Possible Side Effects: Barbiturates are addictive and can result in build up of tolerance and withdrawal symptoms Other side effects are similar to, although often more severe than, benzodiazepines

What they Treat: Used to treat physiological symptoms of anxiety such as sweating, heart palpitations, tremors.

This category covers medications typically used to treat psychotic disorders such as schizophrenia, and psychotic symptoms present with some mood disorders.

How they Work: Medications in this classification work by blocking dopamine (a neurotransmitter in the brain) receptors

Possible Side Effects: Side effects include those similar to the
antidepressant medications, although more serious side effects are possible, especially with longer term use. These include tardive dyskinesia (abnormal, involuntary movement of the arms, legs, and head) and Parkinsonism (symptoms resembling Parkinson’s disease, such as muscle stiffness, stooped posture, and drooling). Antipsycotics may also cause sleepiness, rashes on the skin, seizures, and sexual dysfunction.