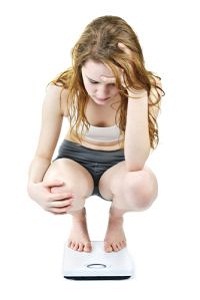 Much research has been completed on this disorder, and results indicate a strong familial undercurrent. Many individuals with Anorexia come from over controlling families where nurturance is lacking. Studies suggest that sexual abuse survivors are more prone to the disorder, as are fraternal twins and first degree relatives of those who have anorexia, the latter suggesting a biological component as well.

Most often diagnosed in females (up to 90%), Anorexia is characterized by failure to maintain body weight of at least 85% of what is expected, fear of losing control over your weight or of becoming ‘fat.’ There is typically a distorted body image, where the individual sees themselves as overweight despite overwhelming evidence to the contrary.

Treatment involves, initially, focusing on improving the individual’s health. Once this is obtained, therapy can be useful in helping the individual maintain normal eating habits and explore faulty thinking which resulted in the distorted body image and excessive needs for control.

If caught in time, Anorexia is very treatable, but can easily lead to severe physical problems and death if it is allowed to continue. In many cases, an individual with anorexia is very reluctant to get treatment as this would mean giving up control. Inpatient or other hospitalization is often needed when health is at risk.