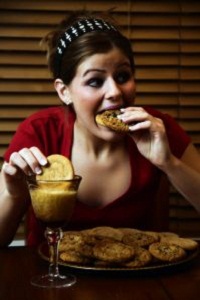 Many individuals with Bulimia come from over controlling families where nurturance is lacking. Studies suggest that sexual abuse survivors are more prone to the disorder, as are fraternal twins and first degree relatives of those who have anorexia, the latter suggesting a biological component as well.

The key characteristics of this disorder include bingeing (the intake of large quantities of food) and purging (elimination of the food through artificial means such as forced vomiting, excessive use of laxatives, periods of fasting, or excessive exercise).

Treatment is similar to Anorexia in that the primary focus is on restoring health and then focusing on normal eating patterns and exploring underlying issues.

Individuals with bulimia are less reluctant to get treatment due to the more obvious symptoms and self recognition of such. Prognosis is therefore improved.