The specific cause of this disorder is not known. Some argue that it is itself a symptom of another psychiatric disorder such as those involving psychosis or delusional beliefs. 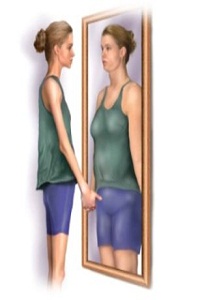 Preoccupation with a specific body part and the belief that this body part is deformed or defective. The preoccupation is significantly excessive and causes distress or significant impairment in functioning. It is not better explained by another disorder such as dissatisfaction with body shape in anorexia or delusions associated with a psychotic disorder.

Because the disorder is most often gradual, taking several months or years to develop, intervention is difficult. Therapy is typically refused by individuals with this disorder as well as any suggestions for medication.

Mixed. Some recent studies suggest good results with medications such as antidepressants.