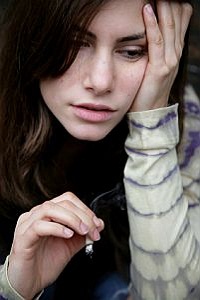 There is evidence that genetic factors play a role in both dependence and abuse. Other theories involve the use of substances as a means to cover up or get relief from other problems (e.g., psychosis, relationship issues, stress), which makes the dependence or abuse more of a symptom than a disorder in itself.

A pattern of substance use leading to significant impairment in functioning. One of the following must be present within a 12 month period: (1) recurrent use resulting in a failure to fulfill major obligations at work, school, or home; (2) recurrent use in situations which are physically hazardous (e.g., driving while intoxicated); (3) legal problems resulting from recurrent use; or (4) continued use despite significant social or interpersonal problems caused by the substance use. The symptoms do not meet the criteria for substance dependence as abuse is a part of this disorder.

Research suggests that no treatment method is superior, but that social support is very important. An openness to accept the abuse is also paramount in successfully treating the illness. Organizations such as AA and NA have had better than average success in reducing relapse.

Variable. Both substance abuse and dependence is difficult to treat and often involves a cycle of abstinence from the substance and substance use.