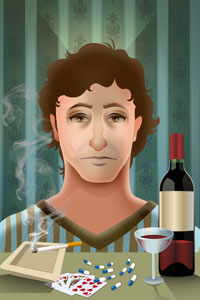 For years, biological theory played a significant role in our view of human development and personality.  Toward the beginning of the 2oth Century, however, views began to change and personality was seen as involving both biology and environment.  Hans Eysenck, however, fought against this trend.  By using the statistic known as Factor Analysis, he concluded that all human traits can be broken down into two distinct categories:

He called these categories Supertraits (See figure below).  According to his theory, everyone exhibits specific responses to both internal and external stimuli.  These specific responses will vary according to the intensity of the stimuli, the situation, state of mind, and many other factors.  At some point, however, we will begin to see trends in how we respond.  A person who is very concerned with how other people view her, might shy away from a stranger in most specific situations.  When this behavior becomes the normal way to respond to new people, the response then becomes a habit.

Suppose now that she also avoids public settings where a large number of people gather, or possibly limits her social activity to only a few trusted friends.  When all of these habitual responses are combined, the become part of a larger group known as a trait.  In this case, the trait may be called shyness or perhaps even social phobia.

This trait, Social phobia, is a component of one of the three supertraits, introversion-extroversion.  If we see that she also prefers soft music over loud music, intellectual pursuits over than team sports, or other similar solo activities, we could then classify her as an introvert.

When we look at an individuals specific responses, combine them into habitual responses, further develop a set of specific traits and then determine where they fall on the two supertraits, we would notice that the vast differences in personality prohibit us from such a simple theory.  Because of this, Eysenck argued that there were varying degrees of each of the two supertraits and most of us fall somewhere on the spectrum between Stable versus Unstable (neurotic) and Introverted versus Extroverted.

The figure below describes that diagram.  The person who is high on extroversion and high on stability may fall in the lower right quadrant of the circle.  Those who are less stable and more introverted would fall somewhere in the upper left.  According to this diagram, each of us will ultimately fall somewhere on the circle based on a sum of our responses and traits.