According to Sigmund Freud, there are only two basic drives that serve to motivate all thoughts, emotions, and behavior.  These two drives are, simply put, sex and aggression.  Also called Eros and Thanatos, or life and death, respectively, they underlie every motivation we as humans experience. 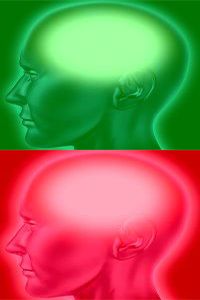 As you learn more about Freud’s theories, you’ll start to see a sexual pattern develop, one that emphasizes sex as a major driving force in human nature.  While this can seem overdone at times, remember what sex represents.  Sexual activity is a means to procreation, to bringing about life and therefore assuring the continuation of our bloodline.  Even in other animals, sex is a primary force to assure the survival of the species.

Aggression, or the death instinct, on the other hand serves just the opposite goal.  Aggression is a way to protect us from those attempting harm.  The aggression drive is a means to allow us to procreate while at the same time eliminating our enemies who may try to prevent us from doing so.

While it sounds very primitive, it must not be looked at merely as sexual activity and aggressive acts.  These drives entail the whole survival instinct and could, perhaps, be combined into this one drive: The drive to stay alive, procreate, and prevent others from stopping or reducing these needs.  Looking at the animal kingdom it is easy to see these forces driving most, if not all, of their behavior.

Lets look at a few examples.  Why would an adult decide to get a college degree?  According to Freud, we are driven to improve ourselves so that we may be more attractive to the opposite sex and therefore attract a better mate.  With a better mate, we are more likely to produce offspring and therefore continue our bloodline.  Furthermore, a college degree is likely to bring a higher income, permitting advantages over others who may be seen as our adversaries.

Sigmund Freud’s Theory is quite complex and although his writings on psychosexual development set the groundwork for how our personalities developed, it was only one of five parts to his overall theory of personality.  He also believed that different driving forces develop during these stages which play an important role in how we interact with the world.

The id doesn’t care about reality, about the needs of anyone else, only its own satisfaction.  If you think about it, babies are not real considerate of their parents’ wishes.  They have no care for time, whether their parents are sleeping, relaxing, eating dinner, or bathing.  When the id wants something, nothing else is important.

Within the next three years, as the child interacts more and more with the world, the second part of the personality begins to develop.  Freud called this part the Ego.  The ego is based on the reality principle.  The ego understands that other people have needs and desires and that sometimes being impulsive or selfish can hurt us in the long run.  Its the ego’s job to meet the needs of the id, while taking into consideration the reality of the situation.

By the age of five, or the end of the phallic stage of development, the Superego develops.  The Superego is the moral part of us and develops due to the moral and ethical restraints placed on us by our caregivers.  Many equate the superego with the conscience as it dictates our belief of  right and wrong.

In a healthy person, according to Freud, the ego is the strongest so that it can satisfy the needs of the id, not upset the superego, and still take into consideration the reality of every situation.  Not an easy job by any means, but if the id gets too strong, impulses and self gratification take over the person’s life.  If the superego becomes to strong, the person would be driven by rigid morals, would be judgmental and unbending in his or her interactions with the world.  You’ll learn how the ego maintains control as you continue to read.

Because the unconscious is so large, and because we are only aware of the very small conscious at any given time, this theory has been likened to an iceberg, where the vast majority is buried beneath the water’s surface.  The water, by the way, would represent everything that we are not aware of, have not experienced, and that has not been integrated into our personalities, referred to as the nonconscious.