King of the Mountain

Perhaps the most well known contribution to humanistic psychology was introduced by Abraham Maslow.  Maslow originally studied psychology because of his intrigue with behavioral theory and the writings of John B. Watson. 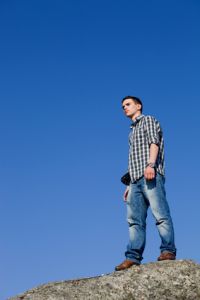 Maslow grew up Jewish in a non-Jewish neighborhood.  He spent much of his childhood alone and reported that books were often his best friends.  Despite this somewhat lonely childhood, he maintained his belief in the goodness of mankind.  After the birth of his first child, his devotion to Watson’s beliefs began a drastic decline.  He was struck with the sense that he was not nearly in control as much as Watson and other behaviorists believed.  He saw more to human life than just external reinforcement and argued that human’s could not possibly be born without any direction or worth.

At the time when he was studying psychology, behaviorism and psychoanalysis were considered the big two.  Most courses studies these theories and much time was spent determining which theory one would follow.  Maslow was on a different path.

He criticized behaviorism and later took the same approach with Freud and his writings.  While he acknowledged the presence of the unconscious, he disagreed with Freud’s belief that the vast majority of who we are is buried deep beyond our awareness.  Maslow believed that we are aware of our motives and drives for the most part and that without the obstacles of life, we would all become psychologically healthy individuals with a deep understanding of ourselves and an acceptance of the world around us.  Where Freud saw much negativity, Maslow focused his efforts on understanding the positives of mankind.  It could be said that psychoanalytic thought is based on determinism, or aspects beyond our control, and humanistic thought is based on free will.

Maslow’s most well known contribution is the Hierarchy of Needs and this is often used to summarize the belief system of humanistic psychology.  The basic premise behind this hierarchy is that we are born with certain needs.  Without meeting these initial needs, we will not be able to continue our life and move upward on hierarchy.  This first level consists of our physiological needs, or our basic needs for survival.  Without food, water, sleep, and oxygen, nothing else in life matters.

Once these needs are met, we can move to the next level, which consists of our need for safety and security.  At this level we look seek out safety through other people and strive to find a world that will protect us and keep us free from harm.  Without these goals being met, it is extremely difficult to think about higher level needs and therefore we can not continue to grow.

When we feel safe and secure in our world then we begin to seek out friendships in order to feel a sense of belonging.  Maslow’s third level, the need for belonging and love, focuses on our desire to be accepted, to fit in, and to feel like we have a place in the world.  Getting these needs met propels us closer to the top of this pyramid and into the fourth level, called esteem needs.  At this level we focus our energy on self-respect, respect from others, and feeling that we have made accomplishments on our life.  We strive to move upward in careers, to gain knowledge about the world, and to work toward a sense of high self-worth.

The final level in the hierarchy is called the need for self-actualization.  According to Maslow, may people may be in this level but very few if anybody ever masters it.  Self-actualization refers to a complete understanding of the self.  To be self-actualized means to truly know who you are, where you belong in the greater society, and to feel like you have accomplished all that you have set out to accomplish.  It means to no longer feel shame or guilt, or even hate, but to accept the world and see human nature as inherently good.

As you read through the section above, many likely tried to place themselves on one of the five levels of the pyramid.  This may be an easy task for some, but many struggle with the ups and downs of life.  For many of us, life is not that straight forward.  We often have one foot in one level, the other foot in the next level, and are reaching at times trying to pull ourselves up while making sure we don’t fall backward at other times.

As we climb the pyramid, we often make headway but also notice that two steps forward can mean one step back.  Sometimes it even feels like two steps forward means three steps back.  The goal of mankind, however, is to keep an eye on the top of the pyramid and to climb as steadily as possible.  We may stumble at times and we may leap forward at times.  No matter how far we fall backward, however, the road back up is easier since we already know the way.