Erik Erikson wasn’t trained by Sigmund Freud, nor did he hold a Doctorate a highly respected university.  In fact, he was not formally educated like the vast majority of his psychodynamic colleagues.  Although his parents pushed for medical school, Erikson saw himself as an artist and spent his youth wandering through Europe living the artist’s life.  In 1927, he took a job working with children of Freud’s patients and friends.  The school approached development psychoanalytically and Erikson was soon to master this theory and begin developing his own theories relating to personality development.  His two major contributions to psychodynamic thought include a reappraisal of the ego and an extended view of developmental stages. 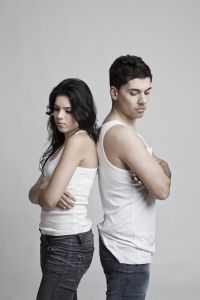 Erik Erikson believed that the ego Freud described was far more than just a mediator between the superego and the id.  He saw the ego as a positive driving force in human development and personality.  As such, he believed the ego’s main job was to establish and maintain a sense of identity.  A person with a strong sense of identity is one who knows where he is in life, has accepted this positions and has workable goals for change and growth.  He has a sense of uniqueness while also having a sense of belonging and wholeness.

Those who have weaker egos, encounter trying times, or who have poorly developed egos get trapped in what is termed an identity crisis.  According to Erikson, an identity crisis is a time in a person’s life when they lack direction, feel unproductive, and  do not feel a strong sense of identity.  He believed that we all have identity crises at one time or another in our lives and that these crises do not necessarily represent a negative but can be a driving force toward positive resolution.

Like Freud and many others, Erik Erikson maintained that personality develops in a predetermined order. Instead of focusing on sexual development, however, he was interested in how children socialize and how this affects their sense of self.  He saw personality as developing throughout the lifetime and looked at identity crises at the focal point for each stage of human development.

Erikson’s Theory of Psychosocial Development has eight distinct stage, each with two possible outcomes. According to the theory, successful completion of each stage results in a healthy personality and successful interactions with others. Failure to successfully complete a stage can result in a reduced ability to complete further stages and therefore a more unhealthy personality and sense of self. These stages, however, can be resolved successfully at a later time.

From ages birth to one year, children begin to learn the ability to trust others based upon the consistency of their caregiver(s). If trust develops successfully, the child gains confidence and security in the world around him and is able to feel secure even when threatened. Unsuccessful completion of this stage can result in an inability to trust, and therefore an sense of fear about the inconsistent world. It may result in anxiety, heightened insecurities, and an over feeling of mistrust in the world around them.

Autonomy vs. Shame and Doubt

Between the ages of one and three, children begin to assert their independence, by walking away from their mother, picking which toy to play with, and making choices about what they like to wear, to eat, etc. If children in this stage are encouraged and supported in their increased independence, they become more confident and secure in their own ability to survive in the world. If children are criticized, overly controlled, or not given the opportunity to assert themselves, they begin to feel inadequate in their ability to survive, and may then become overly dependent upon others, lack self-esteem, and feel a sense of shame or doubt in their own abilities.

Around age three and continuing to age six, children assert themselves more frequently. They begin to plan activities, make up games, and initiate activities with others. If given this opportunity, children develop a sense of initiative, and feel secure in their ability to lead others and make decisions. Conversely, if this tendency is squelched, either through criticism or control, children develop a sense of guilt. They may feel like a nuisance to others and will therefore remain followers, lacking in self-initiative.

From age six years to puberty, children begin to develop a sense of pride in their accomplishments. They initiate projects, see them through to completion, and feel good about what they have achieved. During this time, teachers play an increased role in the child’s development. If children are encouraged and reinforced for their initiative, they begin to feel industrious and feel confident in their ability to achieve goals. If this initiative is not encouraged, if it is restricted by parents or teacher, then the child begins to feel inferior, doubting his own abilities and therefore may not reach his potential.

During adolescence, the transition from childhood to adulthood is most important. Children are becoming more independent, and begin to look at the future in terms of career, relationships, families, housing, etc. During this period, they explore possibilities and begin to form their own identity based upon the outcome of their explorations. This sense of who they are can be hindered, which results in a sense of confusion (“I don’t know what I want to be when I grow up”) about themselves and their role in the world.

Occurring in Young adulthood, we begin to share ourselves more intimately with others. We explore relationships leading toward longer term commitments with someone other than a family member. Successful completion can lead to comfortable relationships and a sense of commitment, safety, and care within a relationship. Avoiding intimacy, fearing commitment and relationships can lead to isolation, loneliness, and sometimes depression.

During middle adulthood, we establish our careers, settle down within a relationship, begin our own families and develop a sense of being a part of the bigger picture. We give back to society through raising our children, being productive at work, and becoming involved in community activities and organizations. By failing to achieve these objectives, we become stagnant and feel unproductive.

As we grow older and become senior citizens, we tend to slow down our productivity, and explore life as a retired person. It is during this time that we contemplate our accomplishments and are able to develop integrity if we see ourselves as leading a successful life. If we see our lives as unproductive, feel guilt about our pasts, or feel that we did not accomplish our life goals, we become dissatisfied with life and develop despair, often leading to depression and hopelessness.