The OCEAN of Personality

If you look at the theories we’ve discussed so far, not only within the trait theory camp, but also those of Hans Eysenck and even Sigmund Freud, you may start to notice some commonalities.  Many different researchers, from different schools of thought have studied the aspects of personality and several interesting similarities have evolved.  While different theorists may use different terminology, five factors or personality traits have shown up in a rather consistent pattern.

These traits, now known as the Big Five are Openness to experience, Conscientiousness, Extroversion/introversion, Agreeableness, and Neuroticism.  These five traits, according to many, make up the OCEAN of human personality, as the acronym goes, and are often considered to be the basic traits under which all other aspects of personality fall. 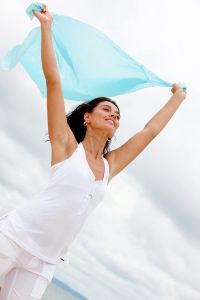 Openness to experience refers to the dimension ranging from outgoing, liberal, interested in new things, and imaginative to reserved, conservative, traditional, and conforming.  Like all of these five traits, people will fall somewhere on a continuum, with most falling somewhere in the middle.

Conscientiousness refers to the continuum ranging from organized, careful, and determined to careless, and weak willed.  Those on the high end of this factor may be seen as stoic, cold, and methodical.  Those on the low end may be seen as gullible, followers, or may see the needs of others as always superceding their own.

Extroversion refers to a person who prefers group activities, group sports, large gatherings, lots of friends and acquaintances, loud music, and social endeavors.  An introvert prefers more solitude, quiet music, small groups or individual sports and would rather stay at home or engage in a small group activity than attend a party or large social gathering.  We’ve even found that extroverts tend to get bored more easily and may be followers who seek out others to avoid this boredom.  Introverts, on the other hand, tend to become anxious more easily, especially in larger groups, and prefer the individual activity to avoid this anxiety, and as more of an individualist, may be seen as more of a leader.

Agreeableness represents the extremes of stubborn versus easy going or suspicious versus trusting.  Those high in agreeableness are helpful, sympathetic to others, and understanding.  Those low on this trait are seen as argumentative, skeptical, and strong-willed.

Finally, neuroticism refers to the dimension of emotional stability.  Someone high on neuroticism would exhibit an instability in his or her emotions, interactions, and relationships.  They may have frequent and wide mood swings, be difficult to understand, and become more upset over daily stressors and interactions.  The person low on neuroticism may be seen as reserved, calm, and perhaps even unemotional.

One of the most obvious applications of understanding human traits is our ability to then measure these traits.  We’ve discussed some of the assessment devices based on trait theory: The Thematic Apperception Test, 16PF, and tests designed to measure the Big Five.  Most of the assessment devices that result from trait theory are self-report type tests.  In other words, the person being tested responds to questions and these responses may or may not be accurate.  People can lie on a test, they can fake bad or fake good, or they can purposefully try to manipulate the results.

If you are taking a test for a sales job and asked questions regarding your level of extroversion/introversion, is it likely that you might lie or stretch the truth a little to get the job?  If you are an introvert, you may feel this would hinder your chances.  So instead, you respond positively to the extrovert questions such as “I prefer social activities to solitary activities, ” or “I enjoy being the center of attention.”

One assessment device that has attempted to address these issues is the Minnesota Multiphasic Personality Inventory.  The MMPI-2 (now in it’s second addition) consists of 567 item to which a test taker responds either true or false.  The response styles or factors have been determined based on statistics and depending on how you respond, you will fall on a continuum of an increasing number of traits.  The main traits include disorder related categories such as depression, psychotic, histrionic (neurotic), introversion, masculinity/femininity (gender role), and hypochondriasis.  This test is so well researched that there are literally over a hundred of these scales now represented.

The MMPI-2 utilizes several techniques that attempt to catch a person who is attempting to alter the results.  It asks questions in a specific way as to determine what’s called a response style.  A response style is a person’s tendency to be honest, fake good, or fake bad.  And, research suggests that it does a fairly good job of this, especially with people who are less knowledgeable about psychological testing.

Another application of trait theory has been in the workplace.  A great deal of research has gone into the determination of traits that are helpful in specific types of jobs.  For example, a sales person would likely do better if she is an extrovert, a teacher more likely to succeed if he is conscientious, or a navy seal more likely to get the job done if he is confident and open to new experiences.

Many career type assessment measures look at personality traits and compare you traits with those who are successful in a specific career.  If most successful and happy psychologists are conscientious, agreeable, understanding introverts and you have these same traits, we could say that you are likely to succeed as a psychologist.  Based on your traits, we could use assessment to determine careers or college majors that fit your personality and therefore offer you a greater chance of success.

Strengths and Criticisms of Trait Theory

While trait theory may seem logical and strait forward, like any theory on personality, it has both its good points and its criticisms.

Objectivity.  Perhaps the biggest strength of trait theory is it’s reliance on statistical or objective data.  Unlike many other theories, the subjectivity or personal experience of the theorists play no role in trait theory.  Freud’s relationship with his mother, Adler’s childhood illness, or Jung’s belief in mythology could be said to have influenced their theories.  In that sense, subjectivity may have biased their ideas.  Trait theory has no bias.

Ease of Use and Understanding.  Trait theory has been used to develop a number of assessment devices.  It provides an easy to understand continuum that provides a good deal of information regarding a person’s personality, interaction, and beliefs about the self and the world.  Understanding traits allows us to compare people, to determine which traits allow a person to do better in college, in relationships, or in a specific career.  We can help guide people toward a more agreeable future by knowing how they interact with the world.

Poor Predictor of Future Behavior.  While we may be able to say, in general that a person falls on the high end or low end of a specific trait, trait theory fails to address a person’s state.  A state is a temporary way of interacting and dealing with the self and others.  For example, an introvert may be quiet, reserved, intellectual, and calm in most situations.  When around close friends, however, he may seem quite outgoing, fun-loving, and excitable.   The same could be said for the extrovert who, when presented with a job interview, may act more introverted, shy, reserved, and intellectual.

Does not Address Development.  While statistics may be a strength of trait theory, it may also be it’s biggest criticism.  Because it is based on statistics rather than theory, it provides no explanation of personality development.  Where most theories argue for the development (past), the current personality (present) and provide a means for change (future), trait theory is stuck in the present.

No Means of Change.  Perhaps because trait theory does little to offer ideas about trait development, it also provides little or no guidance in the changing of negative aspects of a trait.  Without understanding how a trait develops, how do we then change that trait?  Many argue that the application of trait theory is significantly reduced because it lacks a means for change.  What good is to measure something or to know something if we can do nothing about it?