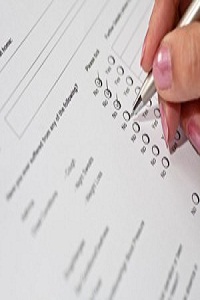 If we want to know if Billy performed better than Sally, or if boys scored higher than girls in our class, or even if Asian children receive higher grades in our school than Caucasian children, the selection of subjects is rather simple.  When we are testing the entire population of possible subjects, we are adequately assured that no subject bias has occurred.

A population refers to the entire pool of possible subjects.  In a classroom or other setting where the entire population is relatively small, testing all subjects may be simple.  However, if we are attempting to understand or gain knowledge related to a large population, such as all third grade children, all depressed adults, or all retail employees, gathering and testing everyone would be relatively impossible.  In this situation, we would need to gather a sample of the population, test this sample, and then make inferences aimed at the entire population of which they represent.

When determining which potential subjects from a large population to include in our study there are several approaches to choose from.  Each of these sampling techniques have its own strengths and, of course, its own weaknesses.  The idea behind adequate sampling, however, remains the same: to gather a sample of subjects that is representative of the greater population.  The ideal research sample is therefore often referred to as a representative sample.

Simple Random Sample.  To assure that the sample of subjects taken from a known population truly represents the population, we could test every subject in the population and choose only those who fall around the mean of the entire population.  This technique is usually pointless because doing so means we could just as easily have tested the entire population on our independent and dependent variables.  Therefore in order to make sure all possible subjects have an equal opportunity to be chosen, simple random sampling is most often the selection method used.

To choose a random group of 10 students from a class of 30, for example, we could put everyone’s name in a hat and use the first ten names drawn as our sample.  In this method, subjects are chosen just as ‘B6’ is chosen in a game of BINGO.  This technique can work well with a small population but can be time consuming and archaic when the population size is large.  To choose 30 students from a class of 250 students would be easier utilizing technology and what is referred to as a random number table.

A random number table is a computer generated list of numbers placed in random order.  Each of the 250 students would be randomly assigned a number between one and 250.  Then the groups would be formed once again using a random number generator.  Figures 1.1 and 1.2 provide examples of how subject selection and subject assignment to groups might be determined based on this method.

Systematic Sample.  When a population is very large, assigning a number to each potential subject could also be tiresome and time consuming.  A systematic sample is a random sample compiled in a systematic manner.  If you had a list of all licensed teachers, for example, and wanted to mail a survey to 200 of them, systematic sampling might be the sampling method of choice.  For this example, a page and a teacher number on that page are determined at random.  This would represent the first subject and the starting point for choosing the remaining subjects.

A random number would be generated, for example 150.  Then every 150th teacher would become a subject until you have selected enough for your study.  If you complete the list before selecting enough subjects, you would continue back at the beginning of the list.  Once the subjects are selected, the technique of random assignment can be used to assign subjects to particular groups.

.  The use of a stratified sample refers to the breaking down of the population into specific subsets before choosing which ones will take part in the study.  For example, if you are studying all third grade students in your state, you may want to make sure that every county in your state is represented in your study.  If you used a simple random sampling technique, you could conceivably end up with many subjects from one county and no subjects from other counties.  A stratified sample allows you to choose your subject pool randomly from a predetermined set of subsets.  In this example, we may want to choose 10 subjects at random from each county within the state.

Other subsets can also be used, such as age, race, or socioeconomic background.  If you wanted to make sure that there were an equal number of males and females, you could use sex as your subset and then randomly choose the same number of subjects from each subset.  This type of sampling is useful when the population has some known differences that could result in different outcomes.  For instance, if you already know that 80% of the students are male, you may want to select 40 male students and 10 female students so that your sample represents the breakdown of sex within the population.

.  Cluster sampling could be considered a more specific type of stratified sample.  When this technique is used, potential subsets of subjects are first randomly eliminated and then the remaining subsets are used to randomly select the sample of subjects to be used in the study.  For example, if you are measuring the effect of prior work experience on college grades in a particular state, you may first make a list of all colleges in the state.  Then you would randomly select a number of colleges to either include or eliminate in the selection process.  Once you have a subset of colleges, you could use the same technique to randomly include or eliminate the specific classes.  From the remaining classes, you would then randomly select a group of students with work experience and a group of students with no work experience to be placed in your two groups.

.  Nonprobability refers to a group of subjects chosen based on their availability rather then their degree of representativeness of the population.  Surveys are often done in this manner.  Imagine going to the local mall to gather information about the buying habits of mall shoppers.  Your subject pool does not represent all mall shoppers but rather those mall shoppers who happen to walk by your location on that day.  The same would hold true for a survey over the phone or via mail.  Those who respond to your questions or return the mailed survey do not necessarily represent the population at large.  Instead, they represent the population who was home and was willing to respond to your questions or those who took the time to complete and return the survey.

While at first glance this method seems unprofessional, it allows for the gathering of information in a short amount of time.  It is not considered standardized research and would be scrutinized if submitted to a professional journal, but it does have its place.  If you’ve ever visited a website and seen a survey, you might have felt compelled to click on the results link.  When watching a news program you may have not changed channels because you are waiting for the results of a survey that will be reported at the end of the program.  We are highly interested in these ‘informal’ polls and using a nonprobability sample is a quick way to gather large amounts of information in a relatively short amount of time.