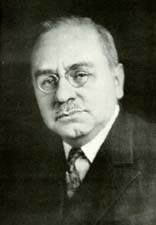 Alfred Adler was born in Vienna Austria  as the second of six children.  Much of his career was molded from childhood experiences, particularly an incident when he was only five years old.  Diagnosed with pneumonia, Adler overheard his physician tell his father that he doubted Alfred would recover from his illness.  At that moment, Adler decided that if he survived he would become a doctor and focus on fighting deadly diseases.  By 1895, after surviving pneumonia, he did just that, and received his medical degree from the University of Vienna.

By 1898, he had written his first book focusing on approaching human beings and illness from the view of the whole person rather than breaking it down into symptoms, instincts, or drives.  In 1902, being one of the few professionals to praise the writings of Sigmund Freud, he received a hand written note from Freud asking him to join a weekly discussion group on psychopathology.

He did so, but soon realized his view of human nature differed from Freud’s, particularly Freud’s theory of sexual drives and the sexual overtones of dream interpretation.  Adler left the group in 1911, along with eight colleagues, and formed his own school, never seeing Sigmund Freud again.

He wrote several other books over the next twenty years, traveled abroad bringing with him the idea of child guidance clinics that he originally founded in Vienna.  He lectured at Columbia University in 1926 and from 1932 until 1937, Adler lived in the United States during the academic year teaching at Long Island College of Medicine.  On May 28, 1937, Adler collapsed of a sudden heart attack and died almost instantly.