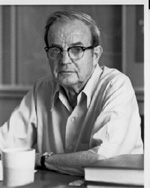 Harry Harlow was born in Fairfield, Iowa and was educated in the field of Ethology, or the study of primates. He spent his entire professional career teaching at the University of Wisconsin from 1930-1974. His focus of research was on the learning abilities in primates and he observed the phenomenon of 'learning to learn.' His work with infant monkeys and their surrogate mothers (terrycloth dummies) demonstrated the importance of bonding between primate mothers and infants for emotional health and growth. He found that although other surrogate mothers provided nourishment, the infants preferred the 'warm and fuzzy' surrogate mother and without this interaction had emotional and physical difficulties later in life.