You might already know that possible symptoms of schizophrenia can include delusions and hallucinations. But did you know that in some situations people with schizophrenia actually have a better grasp on reality that those without the disorder?

Specifically, people with schizophrenia seem not to be susceptible to some kinds of optical illusions. Researchers have long known that schizophrenia is associated with fundamental changes in perception, and there’s now mounting evidence that these changes can be detected in something as trivial as how people see optical illusions.

Here are 4 illusions that people with and without schizophrenia tend to perceive differently:

When presented with a concave mask, people tend to see it as convex rather than concave – that is, they see it as a normal mask rather than the hollow mask it really is. The idea of a concave face doesn’t make a lot of sense, so people’s brains will generally choose to reinterpret a hollow mask as a more familiar convex face. 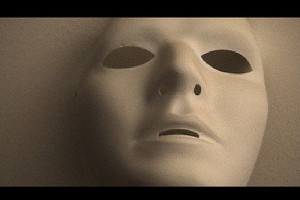 People with schizophrenia, however, aren’t fooled by this illusion. If you show them a hollow mask, they tend to see it for what it is – a hollow mask.

The study also suggested a possible explanation: it may be that people with schizophrenia experience differences in brain connectivity that lead them to process things in a more “bottom-up” way – whereas people without schizophrenia process things in a more “top-down” way, which leads them to conclude based on previous experience that seeing a hollow face is unlikely.

Chubb illusions take advantage of how we perceive contrast – in particular, the fact that we tend to see something as lower-contrast if it’s placed on a high-contrast background. For example, take a look at the following picture: 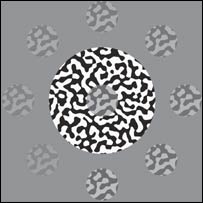 As with the hollow mask illusion, one possible explanation is that people with schizophrenia make less use of context and process things in a more bottom-up manner, which in this case leads them to see the image as it really is.

Although people with schizophrenia aren’t tricked by some illusions, they’re also more susceptible to others.

A 2011 study showed that they’re worse at guessing the lengths of the lines in the Müller-Lyer illusion (the lines are the same length): 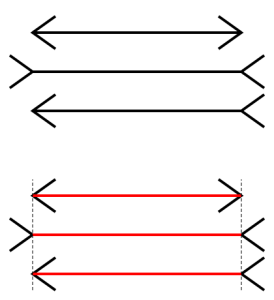 Some optical illusions take place not just in space, but in time as well. In the three-flash illusion, people will often perceive two flashes of light displayed in quick succession as three distinct flashes.

As for how schizophrenia fits into the picture, well, a 2008 study found that in this case the devil’s in the details.

Exactly why things work out this way is anyone’s guess for now, but the researchers suggested that certain aspects of time perception may be more “dilated” for people with schizophrenia.

Screening for Schizophrenia With Optical Illusions

So does all this mean a diagnostic test for schizophrenia based on optical illusions is in the cards? Well, not yet – none of these illusions discriminate perfectly between people with and without schizophrenia.

But some of the results are dramatic, and it’s possible that this line of research could lead to improved screening procedures or at least a better understanding of how schizophrenia has to do with changes in the way people see the world.

Time will tell, but one thing we do know for now is that optical illusions, which we often think of as little more than parlor tricks, could hold some of the secrets to how our brains work, how we see the world and what happens when our thoughts and perceptions go awry.

The Hearts of Introverts and Extraverts
When Do Anxiety Disorders Begin?
The Science of Helicopter Parenting
Posted in General Psychology
← A Psychological Profile of an Abusive BossYes, Turns Out Everyone Really Is Judging Your Typos →