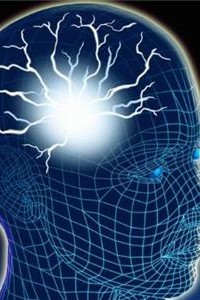 A Neuron is a specialized nerve cell that receives, processes, and transmits information to other cells in the body. We have a fixed number of neurons, which means they do not regenerate. About 10,000 neurons die everyday, but since we start out with between ten and 100 billion (Hooper & Teresi, 1987), we only lose about 2% over our lifetime.

Information comes into the neuron through the Dendrites from other neurons. It then continues to the Cell Body – (soma) which is the main part of the neuron, which contains the nucleus and maintains the life sustaining functions of the neuron. The soma processes information and then passes it along the Axon. At the end of the axon are bulb-like structures called Terminal Buttons that pass the information on to glands, muscles, or other neurons.

Anatomy of a Neuron 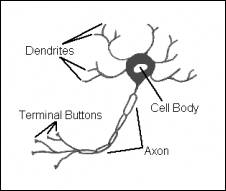 Information is carried by biochemical substances called neurotransmitters, which we will talk about in more detail shortly. The terminal buttons and the dendrites of other neurons do not touch, but instead pass the information containing neurotransmitters through a Synapse. Once the neurotransmitter leaves the axon, and passes through the synapse, it is caught on the dendrite by what are termed Receptor Sites.

correlated with movement, attention, and learning

Too much dopamine has been associated with schizophrenia, and too little is associated with some forms of depression as well as the muscular rigidity and tremors found in Parkinson’s disease.

involved in energy, and glucose metabolism

Too little epinephrine has been associated with depression.

plays a role in mood, sleep, appetite, and impulsive and aggressive behavior

Too little serotonin is associated with depression and some anxiety disorders, especially obsessive-compulsive disorder. Some antidepressant medications increase the availability of serotonin at the receptor sites.

Too little GABA is associated with anxiety and anxiety disorders. Some antianxiety medication increases GABA at the receptor sites.

involved in pain relief and feelings of pleasure and contentedness