You are here: AllPsych > Psychology 101 > Chapter 2: Section 3: The Brain and Nervous System

The Brain and Nervous System 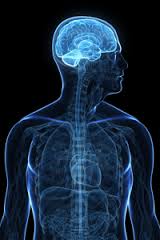 The Central Nervous System consists of the brain and the spinal cord. The Cerebral Cortex, which is involved in a variety of higher cognitive, emotional, sensory, and motor functions is more developed in humans than any other animal. It is what we see when we picture a human brain, the gray matter with a multitude of folds covering the cerebrum. The brain is divided into two symmetrical hemispheres: left (language, the ‘rational’ half of the brain, associated with analytical thinking and logical abilities) and right (more involved with musical and artistic abilities). The brain is also divided into four lobes:

(somatosensory Cortex) involved in the processing of touch, pressure, temperature, and pain

Typically the brain and spinal cord act together, but there are some actions, such as those associated with pain, where the spinal cord acts even before the information enters the brain for processing. The spinal cord consists of the Brainstem which is involved in life sustaining functions. Damage to the brainstem is very often fatal. Other parts of the brainstem include the Medulla Oblongata, which controls heartbeat, breathing, blood pressure, digestion; Reticular Activating System (Reticular Formation), involved in arousal and attention, sleep and wakefulness, and control of reflexes; Pons – regulates states of arousal, including sleep and dreaming.

involved more in memory, and the transfer of information from short-term to long-term memory

The Peripheral Nervous System is divided into two sub-systems.  The Somatic Nervous System – primary function is to regulate the actions of the skeletal muscles. Often thought of as mediating voluntary activity.  The other sub-system, called the Autonomic Nervous System, regulates primarily involuntary activity such as heart rate, breathing, blood pressure, and digestion.  Although these activities are considered involuntary, they can be altered either through specific events or through changing our perceptions about a specific experience.  This system is further broken down into two complimentary systems:  Sympathetic and Parasympathetic Nervous Systems.

The Sympathetic Nervous System controls what has been called the “Fight or Flight” phenomenon because of its control over the necessary bodily changes needed when we are faced with a situation where we may need to defend ourselves or escape.  Imagine walking down a dark street at night by yourself.  Suddenly you hear what you suspect are footsteps approaching you rapidly.  What happens?

Your Sympathetic Nervous System kicks in to prepare your body: your heart rate quickens to get more blood to the muscles, your breathing becomes faster and deeper to increase your oxygen, blood flow is diverted from the organs so digestion is reduced and the skin gets cold and clammy and rerouted so to speak to the muscles, and your pupils dilate for better vision.  In an instant, your body is prepared to either defend or escape.

Now imagine that the footsteps belong to a good friend who catches up to you and offers to walk you home.  You feel relief instantly, but your body takes longer to adjust.  In order to return everything to normal, the Parasympathetic Nervous System kicks in.  This system is slow acting, unlike its counterpart, and may take several minutes or even longer to get your body back to where it was before the scare.

These two subsystems are at work constantly shifting your body to more prepared states and more relaxed states.  Every time a potentially threatening experience occurs (e.g., someone slams on their breaks in front of you, you hear a noise in your house at night, you hear a loud bang, a stranger taps you on the shoulder unexpectedly), your body reacts.  The constant shifting of control between these two systems keeps your body ready for your current situation.