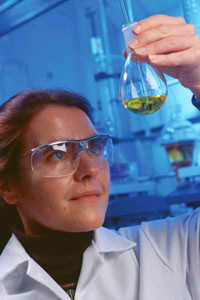 By defining our variables that we will use to test our theory we derive at our Hypothesis, which is a testable form of a theory.

As an example of this, lets say that we have a theory that people who drive sports cars are more aggressive in theory interactions with others. Our independent variable would be the type of car you drive (sports, sedan, SUV, etc.). Our dependent variables, the outcome of our research, would be aggression. We would need to further define aggression so that it is something we can test such as speeding or cutting other people off in traffic. We now have the basics of our very simple experiment and can write our Hypothesis: People who drive sports cars drive over the speed limit more frequently than people who drive other types of cars.

Now we’ve got a hypothesis which is the first step in doing an experiment. Before we can continue, however, we need to be aware of some aspects of research that can contaminate our results. In other words, what could get in the way of our results in this study being accurate. These aspects are called research biases, and there are basically three main biases we need to be concerned with.

We have our hypothesis, and we know what our subject pool is, the next thing we have to do is standardize the experiment. Standardization refers to a specific set of instructions. The reason we want the experiment to be standardized is twofold.