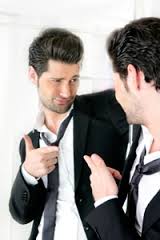 Instinct theory is derived from our biological make-up.  We've all seen spider's webs and perhaps even witnessed a spider in the tedious job of creating its home and trap.  We've all seen birds in their nests, feeding their young or painstakingly placing the twigs in place to form their new home.  How do spiders know how to spin webs?  How do birds now how to build nests?

The answer is biology.  All creatures are born with specific innate knowledge about how to survive.  Animals are born with the capacity and often times knowledge of how to survive by spinning webs, building nests, avoiding danger, and reproducing.  These innate tendencies are preprogrammed at birth, they are in our genes, and even if the spider never saw a web before, never witnessed its creation, it would still know how to create one.

Humans have the same types of innate tendencies.  Babies are born with a unique ability that allows them to survive; they are born with the ability to cry.  Without this, how would others know when to feed the baby, know when he needed changing, or when she wanted attention and affection?  Crying allows a human infant to survive.  We are also born with particular reflexes which promote survival.  The most important of these include sucking, swallowing, coughing, blinking.  Newborns can perform physical movements to avoid pain; they will turn their head if touched on their cheek and search for a nipple (rooting reflex); and they will grasp an object that touches the palm of their hands.

According to Clark Hull (1943, 1952), humans have internal internal biological needs which motivate us to perform a certain way.  These needs, or drives, are defined by Hull as internal states of arousal or tension which must be reduced.  A prime example would be the internal feelings of hunger or thirst, which motivates us to eat.  According to this theory, we are driven to reduce these drives so that we may maintain a sense of internal calmness.

Similar to Hull's Drive Reduction Theory, Arousal theory states that we are driven to maintain a certain level of arousal in order to feel comfortable.  Arousal refers to a state of emotional, intellectual, and physical activity.  It is different from the above theory, however, because it doesn't rely on only a reduction of tension, but a balanced amount.  It also does better to explain why people climb mountains, go to school, or watch sad movies.

Remember Sigmund Freud and his five part theory of personality.  As part of this theory, he believed that humans have only two basic drives: Eros and Thanatos, or the Life and Death drives.  According to Psychoanalytic theory, everything we do, every thought we have, and every emotion we experience has one of two goals: to help us survive or to prevent our destruction.  This is similar to instinct theory, however, Freud believed that the vast majority of our knowledge about these drives is buried in the unconscious part of the mind.

Psychoanalytic theory therefore argues that we go to school because it will help assure our survival in terms of improved finances, more money for healthcare, or even an improved ability to find a spouse.  We move to better school districts to improve our children's ability to survive and continue our family tree.   We demand safety in our cars, toys, and in our homes.  We want criminal locked away, and we want to be protected against poisons, terrorists, and any thing else that could lead to our destruction.  According to this theory, everything we do, everything we are can be traced back to the two basic drives

Although discussed last, humanistic theory is perhaps the most well know theory of motivation.  According to this theory, humans are driven to achieve their maximum potential and will always do so unless obstacles are placed in their way.  These obstacles include hunger, thirst, financial problems, safety issues, or anything else that takes our focus away from maximum psychological growth.

The best way to describe this theory is to utilize the famous pyramid developed by Abraham Maslow (1970) called the Hierarchy of Needs.  Maslow believed that humans have specific needs that must be met and that if lower level needs go unmet, we can not possible strive for higher level needs.  The Hierarchy of Needs shows that at the lower level, we must focus on basic issues such as food, sleep, and safety.  Without food, without sleep, how could we possible focus on the higher level needs such as respect, education, and recognition?

Throughout our lives, we work toward achieving the top of the pyramid, self actualization, or the realization of all of our potential.  As we move up the pyramid, however, things get in the way which slow us down and often knock us backward.  Imagine working toward the respect and recognition of your colleagues and suddenly finding yourself out of work and homeless.  Suddenly, you are forced backward and can no longer focus your attention on your work due to the need for finding food and shelter for you and your family.

According to Maslow, nobody has ever reached the peak of his pyramid.  We all may strive for it and some may even get close, but no one has achieved full self-actualization.  Self-actualization means a complete understanding of who you are, a sense of completeness, of being the best person you could possibly be.  To have achieved this goal is to stop living, for what is there to strive for if you have learned everything about yourself, if you have experienced all that you can, and if there is no way left for you to grow emotionally, intellectually, or spiritually.