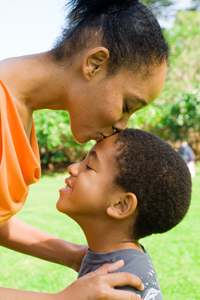 The term reinforce means to strengthen, and is used in psychology to refer to anything stimulus which strengthens or increases the probability of a specific response. For example, if you want your dog to sit on command, you may give him a treat every time he sits for you. The dog will eventually come to understand that sitting when told to will result in a treat. This treat is reinforcing because he likes it and will result in him sitting when instructed to do so.

This is a simple description of a reinforcer (Skinner, 1938), the treat, which increases the response, sitting.  We all apply reinforcers everyday, most of the time without even realizing we are doing it. You may tell your child “good job” after he or she cleans their room; perhaps you tell your partner how good he or she look when they dress up; or maybe you got a raise at work after doing a great job on a project. All of these things increase the probability that the same response will be repeated.

Positive Reinforcement. The examples above describe what is referred to as positive reinforcement. Think of it as adding something in order to increase a response. For example, adding a treat will increase the response of sitting; adding praise will increase the chances of your child cleaning his or her room. The most common types of positive reinforcement or praise and rewards, and most of us have experienced this as both the giver and receiver.

Negative Reinforcement. Think of negative reinforcement as taking something negative away in order to increase a response.  Imagine a teenager who is nagged by his mother to take out the garbage week after week.  After complaining to his friends about the nagging, he finally one day performs the task and to his amazement, the nagging stops.  The elimination of this negative stimulus is reinforcing and will likely increase the chances that he will take out the garbage next week.

Punishment. Punishment refers to adding something aversive in order to decrease a behavior. The most common example of this is disciplining (e.g. spanking) a child for misbehaving. The reason we do this is because the child begins to associate being punished with the negative behavior. The punishment is not liked and therefore to avoid it, he or she will stop behaving in that manner.

Extinction. When you remove something in order to decrease a behavior, this is called extinction. You are taking something away so that a response is decreased.

Research has found positive reinforcement is the most powerful of any of these. Adding a positive to increase a response not only works better, but allows both parties to focus on the positive aspects of the situation. Punishment, when applied immediately following the negative behavior can be effective, but results in extinction when it is not applied consistently. Punishment can also invoke other negative responses such as anger and resentment.

Fixed Ratio. A fixed ratio schedule refers to applying the reinforcement after a specific number of behaviors. Spanking a child if you have to ask him three times to clean his room is an example. The problem is that the child (or anyone for that matter) will begin to realize that he can get away with two requests before he has to act. Therefore, the behavior does not tend to change until right before the preset number.

Fixed Interval. Applying the reinforcer after a specific amount of time is referred to as a fixed interval schedule. An example might be getting a raise every year and not in between. A major problem with this schedule is that people tend to improve their performance right before the time period expires so as to “look good” when the review comes around.

Variable Ratio. This refers to applying a reinforcer after a variable number of responses. Variable ratio schedules have been found to work best under many circumstances and knowing an example will explain why. Imagine walking into a casino and heading for the slot machines. After the third coin you put in, you get two back. Two more and you get three back. Another five coins and you receive two more back. How difficult is it to stop playing?

Variable Interval. Reinforcing someone after a variable amount of time is the final schedule. If you have a boss who checks your work periodically, you understand the power of this schedule. Because you don’t know when the next ‘check-up’ might come, you have to be working hard at all times in order to be ready.