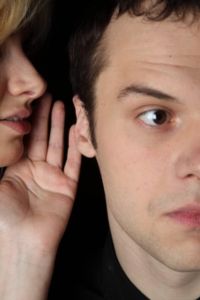 As mentioned in the introduction, perception refers to interpretation of what we take in through our senses.  The way we perceive our environment is what makes us different from other animals and different from each other.  In this section, we will discuss the various theories on how our sensation are organized and interpreted, and therefore, how we make sense of what we see, hear, taste, touch, and smell.

The German word "Gestalt" roughly translates to "whole" or "form," and the Gestalt psychologist's sincerely believed that the whole is greater than the sum of its parts.  In order to interpret what we receive through our senses, they theorized that we attempt to organize this information into certain groups.  This allows us to interpret the information completely without unneeded repetition.  For example, when you see one dot, you perceive it as such, but when you see five dots together, you group them together by saying a "row of dots."  Without this tendency to group our perceptions, that same row would be seen as "dot, dot, dot, dot, dot," taking both longer to process and reducing our perceptive ability.  The Gestalt principles of grouping include four types: similarity, proximity, continuity, and closure.

Similarity refers to our tendency to group things together based upon how similar to each other they are.  In the first figure above, we tend to see two rows of red dots and two rows of black dots.  The dots are grouped according to similar color.  In the next figure, we tend to perceive three columns of two lines each rather than six different lines.  The lines are grouped together because of how close they are to each other, or their proximity to one another.  Continuity refers to our tendency to see patterns and therefore perceive things as belonging together if they form some type of continuous pattern.  In the third figure, although merely a series of dots, it begins to look like an "X" as we perceive the upper left side as continuing all the way to the lower right and the lower left all the way to the upper right.  Finally, in the fourth figure, we demonstrate closure, or our tendency to complete familiar objects that have gaps in them.  Even at first glance, we perceive a circle and a square.

Imagine if every time an object changed we had to completely reprocess it.  The next time you walk toward a building, you would have to re-evaluate the size of the building with each step, because we all know as we get closer, everything gets bigger.  The building which once stood only several inches is now somehow more than 50 feet tall.

Luckily, this doesn't happen.  Due to our ability to maintain constancy in our perceptions, we see that building as the same height no matter what distance it is.  Perceptual constancy refers to our ability to see things differently without having to reinterpret the object's properties.  There are typically three constants: size, shape, brightness.

Size constancy refers to our ability to see objects as maintaining the same size even when our distance from them makes things appear larger or smaller.  This holds true for all of our senses.  As we walk away from our radio, the song appears to get softer.  We understand, and perceive it as being just as loud as before.  The difference being our distance from what we are sensing.

Everybody has seen a plate shaped in the form of a circle.  When we see that same plate from an angle, however, it looks more like an ellipse.  Shape constancy allows us to perceive that plate as still being a circle even though the angle from which we view it appears to distort the shape.

Brightness constancy refers to our ability to recognize that color remains the same regardless of how it looks under different levels of light.  That deep blue shirt you wore to the beach suddenly looks black when you walk indoors.  Without color constancy, we would be constantly re-interpreting color and would be amazed at the miraculous conversion our clothes undertake.

We determine distance using two different cues: monocular and binocular.  Monocular cues are those cues which can be seen using only one eye.  They include size; texture, overlap, shading, height, and clarity.

Size refers to the fact that larger images are perceived as closer to us, especially if the two images are of the same object.   The texture of objects tend to become smoother as the object gets farther away, suggesting that more detailed textured objects are closer.  Due to overlap, those objects covering part of another object is perceived as closer.  The shading or shadows of objects can give a clue to their distance, allowing closer objects to cast longer shadows which will overlap objects which are farther away.  Objects which are closer to the bottom of our visual field are seen as closer to us due to our perception of the horizon, where higher (height) means farther away.  Similar to texture, objects tend to get blurry as they get farther away, therefore, clearer or more crisp images tend to be perceived as closer (clarity).

Binocular cues refer to those depth cues in which both eyes are needed to perceive.  There are two important binocular cues; convergence and retinal disparity.  Convergence refers to the fact that the closer an object, the more inward our eyes need to turn in order to focus.  The farther our eyes converge, the closer an object appears to be.  Since our eyes see two images which are then sent to our brains for interpretation, the distance between these two images, or their retinal disparity, provides another cue regarding the distance of the object.