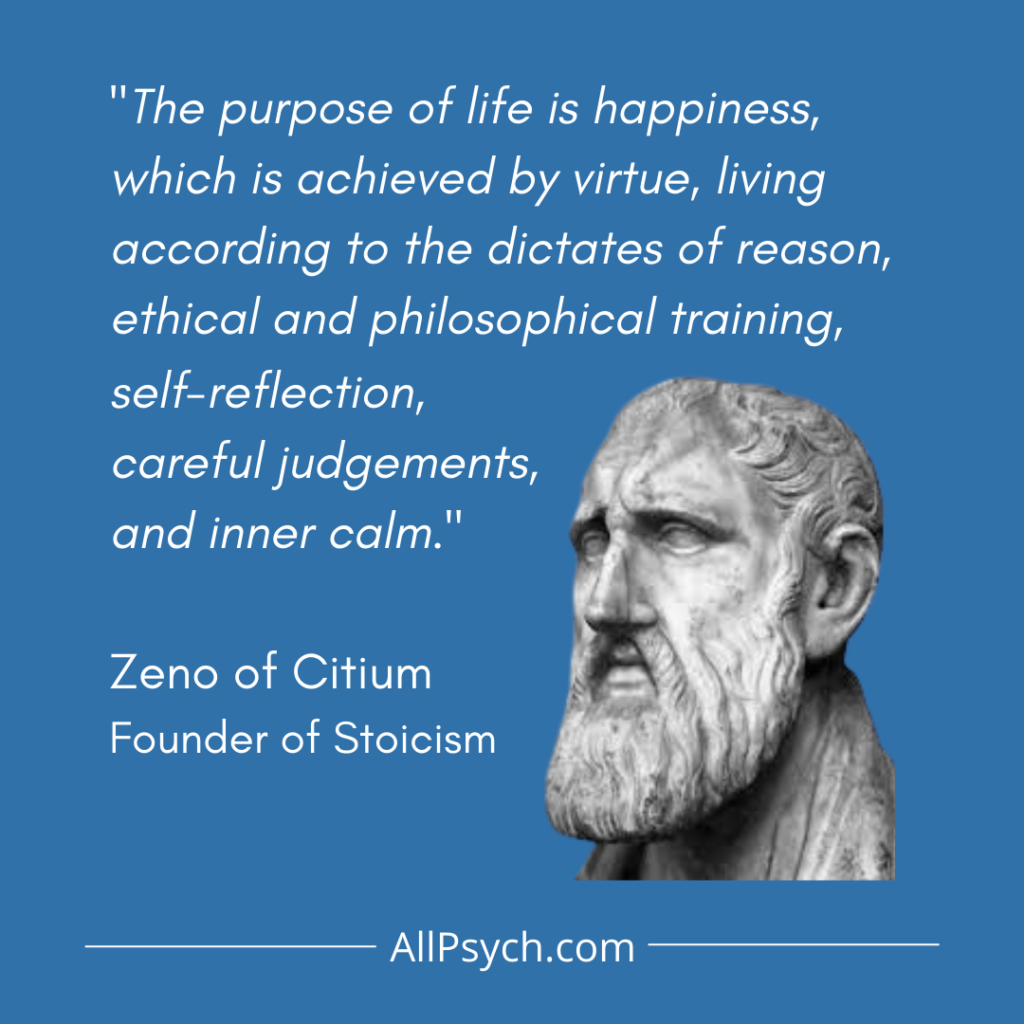 The point of philosophy is to become a better person, at least according to the Stoics. Perhaps this is why the Stoicism and the Stoics writings continue to play a vital role in religion, philosophy, psychology, and mental health. Their four virtues, among other aspects of Stoicism, were expanded from Socrates beginning around 300BCE and today form the foundation for our most popular psychotherapies, including Cognitive-Behavioral Therapy, Rational Emotive Behavior Therapy, Cognitive Therapy, and Acceptance and Commitment Therapy.

Stoicism is an extension of Western Philosophy started by Socrates and continued with Plato and Aristotle. The founder of Stoicism, Zeno of Citium, did not study with Socrates or his students and was not trained as a philosopher, but rather lucked into philosophy after a terrible tragedy involving a sunken ship and the loss of all of his possessions off the shores of ancient Greece. Being broke and in a strange land, Zeno wandered into a bookstore and was introduced to Socrates and philosophy.

He was hooked and went on to read everything he could find on the topic of Socratic Philosophy. He began to share what he learned in stoas, which were long columned hallways open to the public. The term Stoicism, today referring to the restriction of emotions, derives from the term stoa - it originally referred to teachings that occurred in the stoa (hallway lectures).

Stoa of Attalos in Athens Greece

Stoicism is not really about restricting emotions, but rather about the importance of rational thinking. After reading much about Socrates, Zeno concluded that "The purpose of life is happiness, which is achieved by virtue, living according to the dictates of reason, ethical and philosophical training, self-reflection, careful judgements and inner calm." He didn't see happiness as only for the wealthy, or educated, or privileged, but rather for all humans.

Zeno was not only the father of Stoicism, he was also a proponent of social justice. As he shared his wisdom in the halls of Ancient Athens, he charged no fees and had no restrictions on who could attend and participate. Perhaps this is why the three most prolific Stoic writers included such diversity as a slave named Epictetus; a playwright and counselor to the infamous Nero named Seneca the Younger; and Roman Emperor Marcus Aurelius, often referred to as 'the last of the five great emperors.' It is important to note that much of the Stoic writings were destroyed when Sparta took over as the government of Athens during the Peloponnesian War yet the diversity of philosophers is still very broad.

The Four Virtues and Modern Psychology

I wrote an article on Positive Psychology titled "Character Strengths and the Virtuous Life" where I defined virtue as "living the life that best suits who you are - your character." Since Positive Psychology identifies six virtues, four of which are the same as the Stoics. Martin Seligman, a co-founder of Positive Psychology, like the Stoic Philosophers, see virtue as both necessary and sufficient for happiness. Others, like Aristotle, disagree. But that's for another post.

For Stoics, including Zeno of Citium, living a virtuous life is the key to happiness. Virtue is living a life that maximizes wisdom, courage, moderation (or temperance), and courage as it fits with who you are and what you value (Internet Encyclopedia of Philosophy). A virtuous life is about being rational and enjoying positive emotions, eliminating negative emotions, and being true to who you are as a person.

Since the term 'philosophy' literally translates to 'love of wisdom,' let's start with that one. Wisdom, to the Stoics, was not about the acquisition of knowledge, but rather the ability to differentiate what is important and under your control and what is indifferent - the Stoic term for anything that does not or should not impact your ability to experience a happy life (Internet Encyclopedia of Philosophy). A wise person, then, is one who understand what is important for them at that moment from a rational perspective, considering emotions but not allowing them to drive any decisions or actions.

The Serenity Prayer is common across 12-step programs like Alcoholics Anonymous and emphasizes the importance of virtue, especially wisdom and courage. It goes like this: God, grant me the serenity to accept the things I cannot change, the courage to change the things I can, and the wisdom to know the difference. Wisdom is about knowing how we impact our world and how the world impacts us (Kelly, 2022).

Epictetus, one of the most prolific of the Stoics, was once asked how to thrive and he responded with two simple words - persist and resist (Daily Stoic). He likened human existence to a military campaign, arguing that each of us is assigned a key post and to thrive we must hold our ground and prevent the enemy from encroaching. Courage, according to the Stoics, is about the strength to stand up to adversity by maintaining your values and living according to your virtues. A key to surviving and thriving is also resisting temptations that lead you away from your ideal self. To have courage means to persist and to resist.

Like the chess board metaphor in Acceptance and Commitment Therapy, the goal in life is not to continually reposition yourself as your surroundings change or to constantly battle with yourself, but rather to discover your ideal self and maintain that as unmovable. The chess board represents your values while the chess pieces represent your thoughts, beliefs, ideas, emotions, and other contently changing and evolving aspects of yourself. If you focus on how to position your pieces, on which thoughts are good and which are bad, and what you can sacrifice to gain an better advantage or to counter the negative, you lose track of who you are. You are the chess board - identify your virtues , your values, the best in you and then hold steady - persist and resist.

In his journal, Meditations, Marcus Aurelius wrote "if you seek tranquility, do less....do less, better. Because most of what we say and do is not essential" (2002, 4.24).  The idea behind Temperance - sometimes referred to as Moderation - is to find balance. According to Seneca the Younger, counselor to Nero, wealth should be no less than what is essential and no more than what is enough. Stoics believed in the idea of 'all things in moderation,' and argued that anything in excess counters virtue and deprives one of their best life.

Researchers and clinicians in Cognitive-Behavior Therapy warns us about the dangers of intemperance. In Aaron Beck's Cognitive Therapy (CT), cognitive distortions like catastrophizing (assuming the worst) and  all-or-none or polarized thinking (seeing only extremes) are often to blame for worsening depression and anxiety. It is similar for Albert Ellis' Rational-Emotive Behavior Therapy (REBT) where the tendency to overuse extremes of thought like 'shoulds' and 'musts' tend to minimize the positive and amplify the negative (mentalhelp.net) resulting in symptoms of both depression and anxiety.

Marcus Aurelius argued that the Virtue of Justice was the most important virtue that ties all of the virtues together. He asked the point of being courageous if not for other people and the good of wisdom if it is not used to improve the world. Just as Zeno of Cyprus shared his knowledge and wisdom with anyone who wanted to listen at no charge and in public stoa, the Stoics believed that everyone was entitled to live their best life and this included open access to modern ideas. Justice includes the idea of sympatheia - that we are all interdependent; that the entire universe in interconnected - which is emphasized throughout the Stoic writings (Daily Stoic).

It is difficult to argue with Plato on the importance of being wise, brave, temperate, and just. These four virtues apply to us as individuals, as families, and as communities. Stoics believed in the interconnectedness of everyone and everything. Marcus Aurelius eloquently stated, "what hurts the hive, hurts the bee." The counter is also true, what hurts the bee, hurts the hive. According to the Stoics, thriving means living your life according to virtue. Virtue represents who you are, what you value, and how you act.

Carl Rogers, the founder of Person-Centered Therapy, taught us that therapeutic change occurs when we establish genuine relationships that include positive regard and empathy. Like other humanists/existentialists, he also believed that mental health is about minimizing the overlap between who you are in reality and who you want to be. Living a virtuous life is about moving toward your ideal or authentic self.

Workplace Incivility Interferes With Sleep, but How You Use Your Free Time Can Help
Headed for Burnout? Watch for these Top Signs
What Researchers Learned by Reading 700,000 YouTube Comments
Posted in General Psychology and tagged Aaron Beck, Acceptance and Commitment Therapy, Albert Ellis, Carl Rogers, Cognitive-Behavior Therapy, Person-Centered Therapy, Sigmund Freud, Stoic Philosophy
← Being a Perfectionist Doesn’t Have to be a NegativeSocial Media and Self-Esteem →

The Mysteries of Apathy
Money Won't Make You Happy, Unless You Use It to Buy Time
How Often Do People Get Bored on Average?
Login or Register