The way we look at ourselves plays an important role in how we see the world.  The way we see the world plays an important role in how we see ourselves.  In this sense, our view of self and others is an ever-changing circle of influence.  We know that those who are happy see more positive aspects of the world than those who are depressed.  We also know that living in an abusive household or an overly restrictive environment can both lead to depression.  This section will explore the social areas of attribution (how we interpret those around us) and attraction (what we seek in a friend or partner). 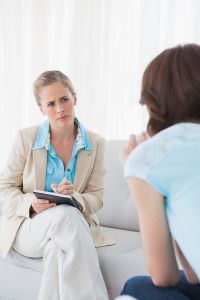 There are basically two sources for our behavior; those influenced by Situational (external) factors and those influenced by Dispositional (internal) factors.  Imagine walking into your boss's office and he immediately tells you, in an angry tone, not to bother him.  An external explanation of this behavior might be, "He's really a nice guy but the stress is overwhelming.  He needs a vacation."  On the other hand, you might see the same behavior and say, "What a jerk, I don't know why is is so angry all the time."  The same behavior is given two very opposite explanations.

Many factors play a role in how we assign attributes to behaviors.  Obviously our view of the world, our previous experience with a particular person or situation, and our knowledge of the behavior play an important role.  Other factors can influence our interpretation as well, and there are two important errors or mistakes we tend make when assigning these attributes.

1. Fundamental Attribution Error.  This refers to the tendency to over estimate the internal and underestimate the external factors when explaining the behaviors of others.  This may be a result of our tendency to pay more attention to the situation rather than to the individual (Heider, 1958) and is especially true when we know little about the other person.  For example, the last time you were driving and got cut off did you say to yourself "What an idiot" (or something similar), or did you say "She must be having a rough day."  Chances are that this behavior was assigned mostly internal attributes and you didn't give a second thought to what external factors are playing a role in her driving behavior.

2. Self-Serving Bias.  We tend to equate successes to internal and failures to external attributes (Miller & Ross, 1975).  Imagine getting a promotion.  Most of us will feel that this success is due to hard work, intelligence, dedication, and similar internal factors.  But if you are fired, well obviously your boss wouldn't know a good thing if it were staring her in the face.  This bias is true for most people, but for those who are depressed, have low self-esteem, or view themselves negatively, the bias is typically opposite.  For these people, a success may mean that a multitude of negatives have been overlooked or that luck was the primary reason.  For failures, the depressed individual will likely see their own negative qualities, such as stupidity, as being the primary factor.

Why are we attracted to certain people and not others?  Why do our friends tend to be very similar to each other?  And what causes us to decide on a mate?  Many of these questions relate to social psychology in that society's influence and our own beliefs and traits play an important role.  Research has found five reasons why we choose our friends.:

Proximity - The vast majority of our friends live close to where we live, or at least where we lived during the time period the friendship developed (Nahemow & Lawton, 1975).  Obviously friendships develop after getting to know someone, and this closeness provides the easiest way to accomplish this goal.  Having assigned seats in a class or group setting would result in more friends who's last name started with the same letter as yours (Segal, 1974).

Association - We tend to associate our opinions about other people with our current state.  In other words, if you meet someone during a class you really enjoy, they may get more 'likeability points' then if you met them during that class you can't stand.

Similarity - On the other hand, imagine that person above agrees with you this particular class is the worse they have taken.  The agreement or similarity between the two of you would likely result in more attractiveness (Neimeyer & Mitchell, 1988)

Reciprocal Liking - Simply put, we tend to like those better who also like us back.  This may be a result of the feeling we get about ourselves knowing that we are likable.  When we feel good when we are around somebody, we tend to report a higher level of attraction toward that person (Forgas, 1992; Zajonc & McIntosh, 1992)

This last statement brings up an important factor in how we determine our friends and partner.  Ever wonder why very attractive people tend to 'hang around' other very attractive people?  Or why wealthy men seem to end up with physically attractive, perhaps even much younger, women?  There is some truth to these stereotypical scenarios because we tend to assign "social assets" or "attraction points" to everyone we meet.

These points are divided into categories such as physical attractiveness, sense of humor, education, and wealth.  If we view education as very important, we may assign more points to this category making it more likely that our friends or our mate will have more education.  If we view wealth as more important then we will be more likely to find a mate who has more money.

We rate ourselves on these same categories and, at least at some level, know our score.  We tend to then pick friends and partners who have a similar score that we do.  Hence an attractive person hangs with other attractive people; or a wealthy older man gets the beautiful younger woman.  Think about your friends and how you would rate them in these categories to find out what is important to you.