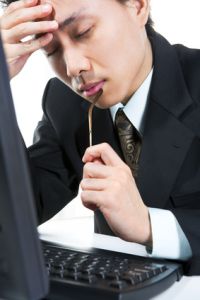 uman memory, like memory in a computer, allows us to store information for later use. In order to do this, however, both the computer and we need to master three processes involved in memory. The first is called encoding; the process we use to transform information so that it can be stores. For a computer this means transferring data into 1’s and 0’s. For us, it means transforming the data into a meaningful form such as an association with an existing memory, an image, or a sound.

Next is the actual storage, which simply means holding onto the information. For this to take place, the computer must physically write the 1’ and 0’s onto the hard drive. It is very similar for us because it means that a physiological change must occur for the memory to be stored. The final process is called retrieval, which is bringing the memory out of storage and reversing the process of encoding. In other words, return the information to a form similar to what we stored.

The major difference between humans and computers in terms of memory has to do with how the information is stored. For the most part, computers have only two types; permanent storage and permanent deletion. Humans, on the other hand are more complex in that we have three distinct memory storage capabilities (not including permanent deletion). The first is  Sensory memory, referring to the information we receive through the senses. This memory is very brief lasting only as much as a few seconds.

Short Term Memory(STM) takes over when the information in our sensory memory is transferred to our consciousness or our awareness (Engle, Cantor, & Carullo, 1993; Laming, 1992).  This is the information that is currently active such as reading this page, talking to a friend, or writing a paper. Short term memory can definitely last longer than sensory memory (up to 30 seconds or so), but it still has a very limited capacity. According to research, we can remember approximately 5 to 9 (7 +/- 2) bits of information in our short term memory at any given time (Miller, 1956)

If STM lasts only up to 30 seconds, how do we ever get any work done?  Wouldn't we start to lose focus or concentrate about twice every minute?  This argument prompted researchers to look at a second phase of STM that is now referred to as Working Memory.  Working Memory is the process that takes place when we continually focus on material for longer than STM alone will allow (Baddeley, 1992).

What happens when our short term memory is full and another bit of information enters? Displacement means that the new information will push out part of the old information. Suddenly some one says the area code for that phone number and almost instantly you forget the last two digits of the number. We can further sharpen our short term memory skills, however, by mastering chunking and using rehearsal (which allows us to visualize, hear, say, or even see the information repeatedly and through different senses).

Finally, there is long term memory (LTM), which is most similar to the permanent storage of a computer. Unlike the other two types, LTM is relatively permanent and practically unlimited in terms of its storage capacity. Its been argued that we have enough space in our LTM to memorize every phone number in the U.S. and still function normally in terms of remembering what we do now. Obviously we don’t use even a fraction of this storage space.

There are several subcategories of LTM. First, memories for facts, life events, and information about our environment are stored in declarative memory. This includes semantic memory, factual knowledge like the meaning of words, concepts, and our ability to do math (Lesch & Pollatsek, 1993, Rohrer et al., 1995) and episodic memory, memories for events and situations (Goldringer, 1996; Kliegel & Lindberger, 1993). The second subcategory is often not thought of as memory because it refers to internal, rather than external information. When you brush your teeth, write your name, or scratch your eye, you do this with ease because you previously stored these movements and can recall them with ease. This is referred to as nondeclarative (or implicit) memory. These are memories we have stored due to extensive practice, conditioning, or habits.

Short Term Memory.  There are typically six reasons why information is stored in our short term memory.

recency effect - often the last bit of information is remembered better because not as much time has past; time which results in forgetting.

distinctiveness - if something stands out from information around it, it is often remembered better.  Any distinctive information is easier to remember than that which is similar, usual, or mundane.

frequency effect - rehearsal, as stated in the first example, results in better memory.  Remember trying to memorize a formula for your math class.  The more you went over it, the better you knew it.

associations - when we associate or attach information to other information it becomes easier to remember.  Many of us use this strategy in our professions and everyday life in the form of acronyms.

reconstruction - sometimes we actually fill in the blanks in our memory.  In other words, when trying to get a complete picture in our minds, we will make up the missing parts, often without any realization that this is occurring.

Long Term Memory.  Information that passes from our short term to our long term memory is typically that which has some significance attached to it.  Imagine how difficult it would be to forget the day you graduated, or your first kiss.  Now think about how easy it is to forget information that has no significance; the color of the car you parked next to at the store or what shirt you wore last Thursday.  When we process information, we attach significance to it and information deemed important is transferred to our long term memory.

There are other reasons information is transferred.  As we all know, sometimes our brains seem full of insignificant facts.  Repetition plays a role in this, as we tend to remember things more the more they are rehearsed.  Other times, information is transferred because it is somehow attached to something significant.  You may remember that it was a warm day when you bought your first car.  The temperature really plays no important role, but is attached to the memory of buying your first car.

You can’t talk about remembering without mentioning its counterpart. It seems that as much as we do remember, we forget even more. Forgetting isn’t really all that bad, and is in actuality, a pretty natural phenomenon. Imagine if you remembered every minute detail of every minute or every hour, of every day during your entire life, no matter how good, bad, or insignificant. Now imagine trying to sift through it all for the important stuff like where you left your keys.

There are many reasons we forget things and often these reasons overlap. Like in the example above, some information never makes it to LTM. Other times, the information gets there, but is lost before it can attach itself to our LTM. Other reasons include decay, which means that information that is not used for an extended period of time decays or fades away over time. It is possible that we are physiologically preprogrammed to eventually erase data that no longer appears pertinent to us.

Failing to remember something doesn’t mean the information is gone forever though. Sometimes the information is there but for various reasons we can’t access it. This could be caused by distractions going on around us or possibly due to an error of association (e.g., believing something about the data which is not correct causing you to attempt to retrieve information that is not there). There is also the phenomenon of repression, which means that we purposefully (albeit subconsciously) push a memory out of reach because we do not want to remember the associated feelings. This is often sited in cases where adults ‘forget’ incidences of sexual abuse when they were children. And finally, amnesia, which can be psychological or physiological in origin.