I’ve been following the US presidential primary elections pretty closely lately, and I woke up this morning thinking I should research an article about lying and deception for AllPsych. Funny how that happened.

Politicians aren’t the only people who lie, of course – they’re just the ones who’re best at doing it with a straight face. Every day we’re all on the giving and the receiving end of dozens of small, or sometimes big, lies (even when those “lies” are nothing more than a fake smile).

The thing about lying, though, is that it’s a lot of work to say something that goes against what you’re thinking. When you lie, your brain looks different and your face looks different. And when you’re being lied to, there are always subtle signs.

Many a psychology study has been devoted to what exactly these subtle signs are and what’s going on in people’s brains when they commit acts of deception. Here are some of the most interesting findings:

1. There’s no such thing as a perfect liar

Good news if you want to believe in humanity: lying just doesn’t come naturally for people. A 2008 study asked people to hide their genuine emotions using a variety of different techniques and found that every single study participant showed some degree of “emotional leakage” in their facial expressions – that is, they inadvertently displayed their true feelings despite their best intentions.

2. Most people are bad at detecting deception

So if most people are bad at lying, good news, right? The world must be a pretty honest place!

Nope. People are almost as bad at detecting lies as they are at lying. In the same study that showed people to be truly awful liars, observers with no training in spotting deception were barely better at identifying the fake emotions than if they’d guessed randomly.

3. Lying affects how much you blink

4. It’s harder to fake negative emotions than positive ones

Now, one possible limitation of the 2008 work is that people just might not be motivated to lie well in a laboratory context. To address this possibility, the researchers followed up with a 2012 study that used TV footage from missing persons cases rather than test subjects.

In the missing persons cases, relatives went on TV pleading for the return of their loved ones. However, about half of those relatives later turned out to have killed the people they claimed to be searching for.

Analyzing the TV footage, the researchers found once again that it’s just not very easy to fake negative emotions, even when the stakes are extremely high: relatives who were lying tended to have happy emotions “leak” into their feigned sadness.

6. It’s harder to lie to people you’re attracted to

A 1985 study looked at a less sinister form of lying than the kind that takes place in murder investigations. Specifically, it looked at the white lies people tell when they want to get along with each other.

People who are faking emotions tend to give away what they’re really feeling through momentary “micro-expressions” in their eyes.

However, these micro-expressions can be hard to pick up. Research published earlier this year found that one reason giveaways in the eyes are so hard to spot is that mouth movements can actually conceal these eye movements.

In fact, this technique is so effective that it stops people from detecting deception even if they try to focus only on the eyes. The reason is that when we look at a face, we’re unable to separate the mouth from the eyes. In the following picture, for example, the eyes in the face on the right look happier to most people even though they’re in fact exactly the same as the eyes in the face on the left: 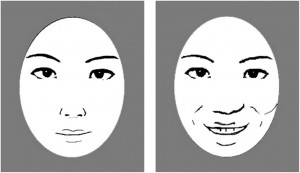 One caveat here is that timing does matter. If the smile comes first, it doesn’t mask the eye micro-expressions. But if it comes immediately afterward, it can make it look like the micro-expressions never happened, which is one reason it’s hard to spot a lie even though people aren’t very good liars.

One of the things about cheating is that doing it often goes against moral rules we’ve been told to follow.

So how to resolve this cognitive dissonance? Easy, just forget the rules!

A study in which people were instructed not to cheat found that the ones who cheated anyway experienced selectively poorer memories for morally relevant information from the honor code telling them not to cheat.

Moreover, their memories weren’t different from people who didn’t cheat before the task they cheated on, only after. In other words, it’s not that they cheated because they forgot the rules – the act of cheating itself made them forget the ethical guidelines.

9. Cheating can be fun

Your faith in humanity might have increased a little when I told you that people are uniformly horrible liars, but I’m now going to undo that: it turns out that in some situations, people actually enjoy cheating.

That’s right. A 2013 study found evidence for a “cheater’s high” in which cheating on problem-solving tasks increased people’s moods and feelings of self-satisfaction. And the high was not related to the rewards gained by cheating – it was about the act of cheating itself.

Now, don’t take to the comment section and yell at me for condoning cheating yet! There’s a big limitation to keep in mind: the study looked at how people feel about cheating in an artificial laboratory context, so it seems likely that they’d experience more guilt in real-world settings.

On the other hand, one more disconcerting aspect of the study to keep in mind: the people who enjoyed cheating predicted they’d feel guilty and have their mood down as a result of cheating – they didn’t know how much they’d like it until they did it.

The bad news doesn’t stop with the fact that people enjoy cheating. It turns out cheating has another short-term benefit: it can make you more creative.

The reason for this isn’t totally clear, but one theory is that both cheating and creativity involve breaking rules and ignoring certain cognitive constraints.

Whatever the reason, it’s not just that more creative people are more likely to cheat or vice-versa. It appears that the act of cheating actually increases your creativity temporarily.

11. Telling people “don’t be a cheater” works better than telling them “don’t cheat”

At the end of the day, even if cheating in some situations gives people a rush, most people want to be honest. In particular, the research says that even if some people don’t mind cheating, no one really wants to be a cheater.

The takeaway, and the last piece of evidence that hopefully tilts the final verdict back in favor of humanity, is that people think of themselves as honest, so the best way to promote honest behavior is to prompt people to think about how their actions relate back to who they are as people.

The Psychology of Eating Meat
Millennials May Be Less Narcissistic Than Previous Generations
Being Stuck in the Past Is Associated With Anxiety, Depression
Posted in General Psychology
← What Do Happy People Tweet About?What Sports Tells Us About the Psychology of Momentum →