We stated earlier that the ego's job was to satisfy the id's impulses, not offend the moralistic character of the superego, while still taking into consideration the reality of the situation.  We also stated that this was not an easy job.  Think of the id as the 'devil on your shoulder' and the superego as the 'angel of your shoulder.'  We don't want either one to get too strong so we talk to both of them, hear their perspective and then make a decision.  This decision is the ego talking, the one looking for that healthy balance. 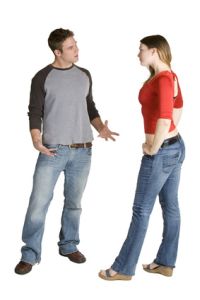 Before we can talk more about this, we need to understand what drives the id, ego, and superego.  According to Freud, we only have two drives; sex and aggression.  In other words, everything we do is motivated by one of these two drives.

arguing against an anxiety provoking stimuli by stating it doesn't exist

taking out impulses on a less threatening target

slamming a door instead of hitting as person, yelling at your spouse after an argument with your boss

avoiding unacceptable emotions by focusing on the intellectual aspects

placing unacceptable impulses in yourself onto someone else

when losing an argument, you state "You're just Stupid;" homophobia

stating that you were fired because you didn't kiss up the the boss, when the real reason was your poor performance

taking the opposite belief because the true belief causes anxiety

returning to a previous stage of development

sitting in a corner and crying after hearing bad news; throwing a temper tantrum when you don't get your way

pulling into the unconscious

acting out unacceptable impulses in a socially acceptable way

sublimating your aggressive impulses toward a career as a boxer; becoming a surgeon because of your desire to cut; lifting weights to release 'pent up' energy

pushing into the unconscious

trying to forget something that causes you anxiety

Ego defenses are not necessarily unhealthy as you can see by the examples above.  In face, the lack of these defenses, or the inability to use them effectively can often lead to problems in life.  However, we sometimes employ the defenses at the wrong time or overuse them, which can be equally destructive.