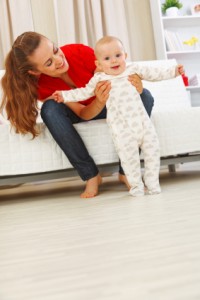 Most infants develop motor abilities in the same order and at approximately the same age. In this sense, most agree that these abilities are genetically preprogrammed within all infants. The environment does play a role in the development, with an enriched environment often reducing the learning time and an impoverished one doing the opposite.

The following chart delineates the development of infants in sequential order. The ages shown are averages and it is normal for these to vary by a month or two in either direction.

2 months – able to lift head up on his own

3 months – can roll over

4 months – can sit propped up without falling over

6 months – is able to sit up without support

14 months – can walk backward without support

17 months – can walk up steps with little or no support

18 months – able to manipulate objects with feet while walking, such as kicking a ball

Probably the most cited theory in the cognitive development in children is Jean Piaget (1896-1980). As with all stage theories, Piaget’s Theory of Cognitive Development maintains that children go through specific stages as their intellect and ability to see relationships matures. These stages are completed in a fixed order with all children, even those in other countries. The age range, however can vary from child to child.

Sensorimotor Stage. This stage occurs between the ages of birth and two years of age, as infants begin to understand the information entering their sense and their ability to interact with the world. During this stage, the child learns to manipulate objects although they fail to understand the permanency of these objects if they are not within their current sensory perception. In other words, once an object is removed from the child’s view, he or she is unable to understand that the object still exists.

The major achievement during this stage is that of Object Permanency, or the ability to understand that these objects do in fact continue to exist. This includes his ability to understand that when mom leaves the room, she will eventually return, resulting in an increased sense of safety and security. Object Permanency occurs during the end of this stage and represents the child’s ability to maintain a mental image of the object (or person) without the actual perception.

Preoperational Stage. The second stage begins after Object Permanency is achieved and occurs between the ages of two to seven years of age. During this stage, the development of language occurs at a rapid pace. Children learn how to interact with their environment in a more complex manner through the use of words and images. This stage is marked by Egocentrism, or the child’s belief that everyone sees the world the same way that she does. The fail to understand the differences in perception and believe that inanimate objects have the same perceptions they do, such as seeing things, feeling, hearing and their sense of touch.

A second important factor in this stage is that of Conservation, which is the ability to understand that quantity does not change if the shape changes. In other words, if a short and wide glass of water is poured into a tall and thin glass. Children in this stage will perceive the taller glass as having more water due only because of it’s height. This is due to the children’s inability to understand reversibility and to focus on only one aspect of a stimulus (called centration), such as height, as opposed to understanding other aspects, such as glass width.

Concrete Operations Stage. Occurring between ages 7 and about 12, the third stage of cognitive development is marked by a gradual decrease in centristic thought and the increased ability to focus on more than one aspect of a stimulus. They can understand the concept of grouping, knowing that a small dog and a large dog are still both dogs, or that pennies, quarters, and dollar bills are part of the bigger concept of money.

They can only apply this new understanding to concrete objects ( those they have actually experienced). In other words, imagined objects or those they have not seen, heard, or touched, continue to remain somewhat mystical to these children, and abstract thinking has yet to develop.

Formal Operations Stage.In the final stage of cognitive development (from age 12 and beyond), children begin to develop a more abstract view of the world. They are able to apply reversibility and conservation to both real and imagined situations. They also develop an increased understanding of the world and the idea of cause and effect. By the teenage years, they are able to develop their own theories about the world. This stage is achieved by most children, although failure to do so has been associated with lower intelligence.