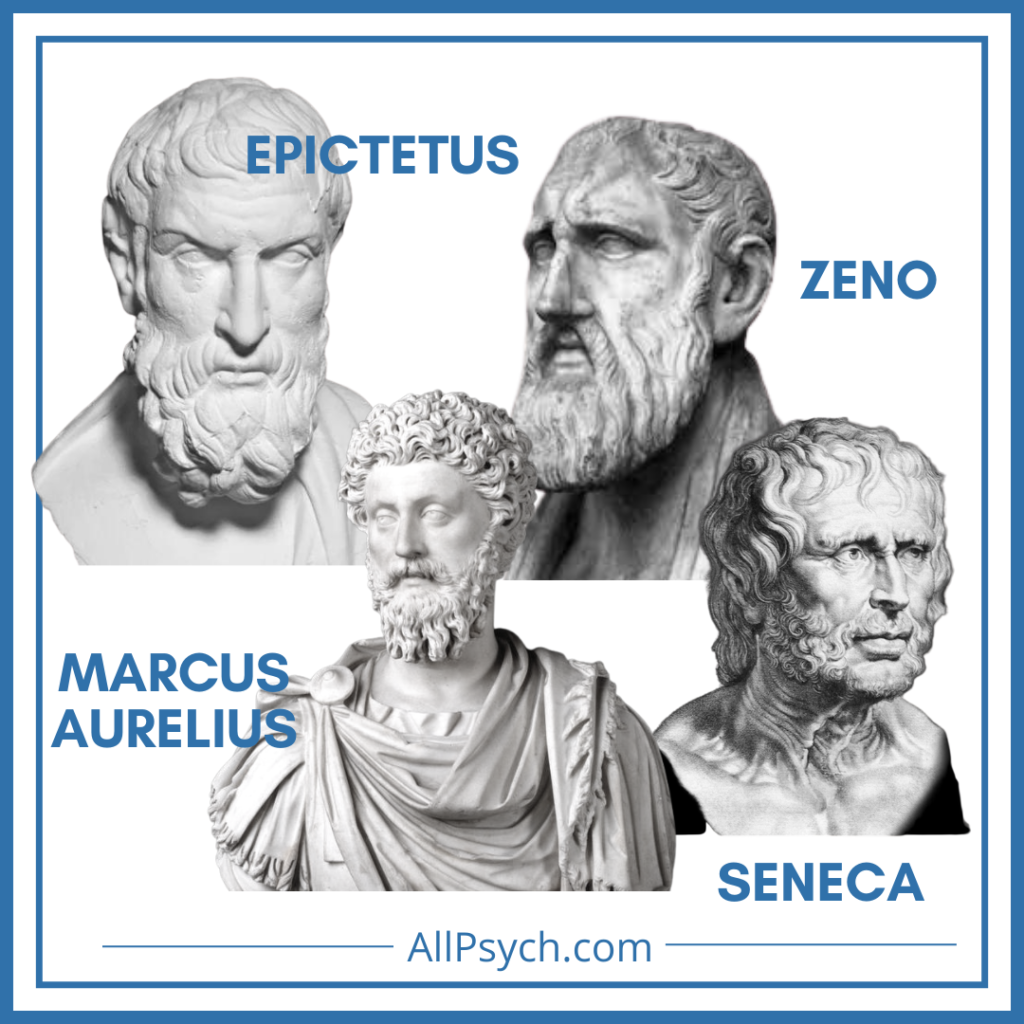 When we think of philosophers, names like Socrates, Plato, and Aristotle often come to mind. For psychology, this makes a lot of sense since we use Socratic Questioning, documented by Plato, as an important component of Cognitive-Behavior Therapy (CBT). Aristotle was the first to write about the mind-body connection. But the first approach to self-help is often credited to the Stoics.

Stoicism flows from the work of Socrates, Plato, and Aristotle. Stoic Philosophy was popular during the Hellenistic period, starting around 320 BC and extending through the rise of Rome in the 1st century AD. It was founded in Athens by Zeno of Citium.

But it is three oddly diverse Romans who are most often cited in Stoic Philosophy: Seneca the Playwright (4 BCE-65 AD), Epictetus the Slave (55 AD-135 AD), and Marcus Aurelius the Emperor (121 AD-180 AD). Their lives and writings form the foundation for modern therapeutic approaches like CBT and Positive Psychology. In fact, Albert Ellis credits Epictetus in the development of Rational-Emotive Behavior Therapy, still today one of the most popular approaches to CBT.

Stoic Philosophy emphasized the importance of virtue and logic, arguing that only through living a virtuous life and being logical, or rational, can one find true happiness.

Being virtuous means living a life that is best suited for you. It means amplifying what is good within you and minimizing any weaknesses. For example, Peterson & Seligman (2004) developed a list of 24 character strength that form the building blocks of virtue. They argue that each of us possess these strengths, but some are more representative of who we are as individuals, what we enjoy, and what we are good at.

These top four or five strengths are called our signature strengths and together they make up our virtue. In this sense, being virtuous literally means amplifying what is good within us. You can read more about virtue and Positive Psychology in the article, Character Strengths and the Virtuous Life.

Logic is more recognized as an important aspect of Stoic Philosophy, perhaps because the term stoic today refers to the absence of emotion. Stoicism at the time meant a reliance on logic as the way to understand the self and the world.

Emotions were still important. In fact, Stoics saw positive emotions as an end goal meaning that if one approached the self and the world logically, the result with be the experiencing of positive emotions like joy, contentment, and gratitude. The opposite would also be true - if you led a life that was less than logical (today we refer to this as having irrational or distorted thoughts) then the resulting emotions would be negative.

Seneca the Younger, or just Seneca, a first century Stoic Philosopher, argued that time flows like a river and that we can do nothing about the river behind us or the river in front of us. All we can do is navigate ourselves where we are in the present moment. Spending our time ruminating about what is behind us or worrying about what may or may not be in front of us wastes the precious commodity of time.

According to Seneca, "It is not that we have a short time to live, but that we waste a lot of it. Life is long enough, and a sufficiently generous amount has been given to us for the highest achievements if it were all well invested. But when it is wasted in heedless luxury and spent on no good activity, we are forced at last by death’s final constraint to realize that it has passed away before we knew it was passing. So it is: we are not given a short life but we make it short, and we are not ill-supplied but wasteful of it… Life is long if you know how to use it."

Epictetus was a slave in the court of Roman Emperor Nero who became one of the most sought after and prolific Stoic Philosopher. He is considered the distant grandfather of cognitive therapy because his writings and ideas are incorporated, sometimes verbatim, into Albert Ellis' Rational Emotive Behavior Therapy (REBT). Epictetus, like Ellis, believed that much of our mental distress is caused by our own irrational beliefs and worry, not by our actual environment.

Ellis expanded on the work of Epictetus by formulating the process humans use to respond to our environment. Often referred to as the A-B-C model, Ellis postulated that when we experience an activating event, the A in his formula, we interpret that event by filtering it through our beliefs. This is the B in the formula. We respond, both emotionally and physically not to the event itself, but to our interpretation of the event. The C in Ellis' formula is the emotional and behavioral consequence of our belief about the activating event.

Marcus Aurelius once said, "Put from you the belief that 'I have been wronged' and with it will go the feeling. Reject your sense of injury, and the injury disappears." He extends the idea that our thoughts or beliefs cause our emotions and that logical thoughts lead to positive emotions by looking at constructs themselves.

In this quote, he suggests that we experience injury not because someone wronged us but because we convince ourself that we were injured. Marcus Aurelius, a 2nd century Roman Emperor, along with other Stoic Philosophers, is considered one of the first developers of a self-help approach and a great grandparent of Cognitive Behavior Therapists.

In his journal, Meditations (which was never meant to be published), he shared three life lessons. These lessons were focused on living a life of virtue based on logic and rational thought and formed the foundation of today's Cognitive Behavior Therapy (CBT).

Our Minds Have Great Power

Like Ellis confirmed with his A-B-C model, our minds are incredibly powerful. They are so powerful, in fact, that the same activating event can have drastically different emotional and behavioral consequences based solely on our interpretation. Marcus wrote, "You have power over your mind, not outside events. Realize this and you will find strength."

People Will Do Evil Things

There will always be evil in the world because people do bad things - not because they longed to be evil but because we make bad decisions based on irrational beliefs. The evil of others becomes our evil, though, when we respond to them in kind.

According to Marcus, because we are all part of the same universe, when we witness a bad deed, rather than respond with another bad deed, we should perform a good deed to return the universe to a state of balance.

Focus on the Present

Time is limited. If we give too much of it to the past or to the future, we have too little remaining to fully engage with the present. His advice was to, "Concentrate every minute like a Roman...on doing what's in front of you with precise and genuine seriousness, tenderly, willingly, with justice."

Peer Coaching and Supported Education
When Therapists Misjudge Their Clients' Emotions
Narcissistic Personality Disorder
Posted in Clinical Psychology and tagged Cognitive-Behavior Therapy, Stoic Philosophy, well-being
← Spotlight on Self-CareBeing a Perfectionist Doesn’t Have to be a Negative →

The Character Traits of Productive Procrastinators
What Do Loneliness and Living Alone Mean for Health Later in Life?
Untangling the Links Between Sedentary Behavior and Depression
Login or Register