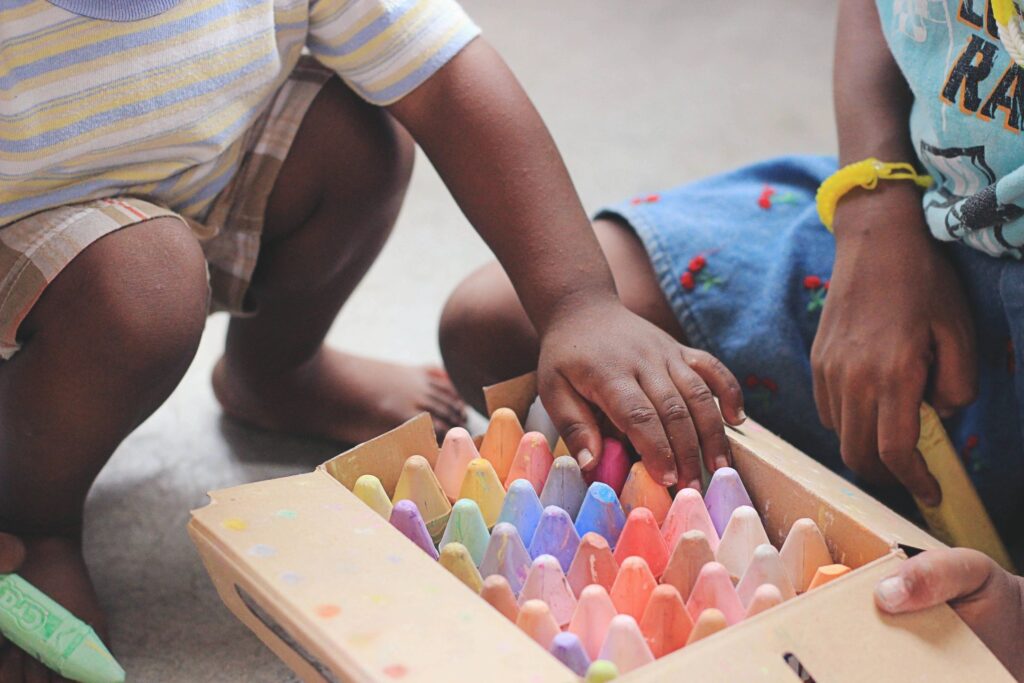 If there’s a game that’s equally challenging for players of all ages, it would be Concentration.

In case you’re not familiar, the game goes like this: lay all the cards in a deck face-down in a grid. Every turn, you get to flip over two cards. If they’re matching cards of the same color (e.g., 3 of diamonds and 3 of hearts), you get to keep them. Otherwise, you turn them back over.

The point, of course, is that if you’re good at remembering the cards you previously turned over, you should be able to quickly collect more cards and win the game.

What makes this a good game for children and adults to play together is that while the rules are simple, it’s challenging for everyone. You might expect that adults, with their more developed cognitive skills, would be able to consistently beat children at the game, but that doesn’t seem to be the case.

After all, children can perform some cognitive feats of their own (like learning languages!). In fact, some people report anecdotally that young children are the best Concentration players.

So what’s the truth? A couple studies have compared the performance of children and adults in Concentration.

A 1996 study compared 5- and 10-year-old children with adults on the game of Concentration. It found that the adults did slightly outperform the children, but with a couple interesting caveats.

On top of that, it turned out that the 5-year-olds actually made fewer spatial errors than either the 10-year-olds or the adults, and they forgot less information over the course of the game. The adults had the highest overall performance because they had a more optimal, less redundant strategy for discovering new cards, but the young children were best at actually remembering the locations of cards.

A more recent study, published in the journal Consciousness and Cognition, found that adults outperformed 6-year-old but not 8-year-old children. This result is slightly different than the last one, but it fits with the theme of the age-related gap in Concentration performance being relatively small.

One reason adults might not be any better than children at Concentration, according to the authors, is that “adults seem to use strategies that are effective in real life situations, but may be less appropriate when playing the game.”

Mental Imagery Can Enhance Motivation
Is Exercise and a Nap the Magic Combination for Memory?
Too Much Sitting at School Leads to Attention Lapses
Posted in Cognitive Psychology and tagged Adults, Children, Gaming
← Your Personality Might Have Implications for Your Cat’s Wellbeing6 Predictors of Relationship Satisfaction →