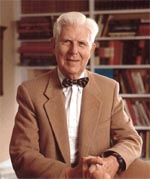 Aaron Beck was born in Providence, Rhode Island.  He completed hi undergraduate studies at Brown University and received his M.D. in Psychiatry at Yale University in 1946.  He was initially trained as a psychoanalyst and conducted research on the psychoanalytic treatment of depression.  With out the strong ability to collect data to this end, he began exploring cognitive approaches to treatment.

During these experiments, Beck identified patterns of thinking that correlated with symptoms of depression.  In an effort to better understand depression and related illness, he developed the Beck Depression Inventory, Beck Anxiety Inventory, and the Scale for Suicide Ideation.  Beck is best known for his cognitive approach to the treatment of disorders, especially depression, and for doing much of the initial research on the theory that distorted or inaccurate thoughts are a precursor in the development and maintenance of depression.